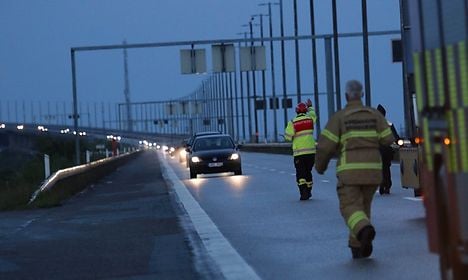 The bridge was temporarily closed during the police action. Photo: Mathias Øgendahl/Scanpix
Four Danes were arrested in the tunnel of the Øresund Bridge on Thursday night following a police chase involving both Danish and Swedish police.
According to the Copenhagen Police, a routine traffic stop by Swedish police quickly escalated when the vehicle refused to follow orders to pull over. The car sped past the Swedish cops, who gave chase and called in their Danish colleagues from the other side of the bridge.
“A car took off from the Swedish police and headed toward Denmark. Therefore we were asked to assist,” Copenhagen Police spokesman Michael Andersen told broadcaster DR.
As Danish and Swedish police chased the vehicle, one of the four men inside suddenly jumped out while on the island of Peberholmen. He was quickly arrested and police found two machine guns on the island, which they believe the arrested man tried to ditch.
The vehicle continued for a short while before being stopped in the tunnel, at which point the other three occupants were also arrested.
All four of the arrested men are Danish and police said that they have all been in legal trouble before.
Police were expected to press formal charges against the men on Friday.