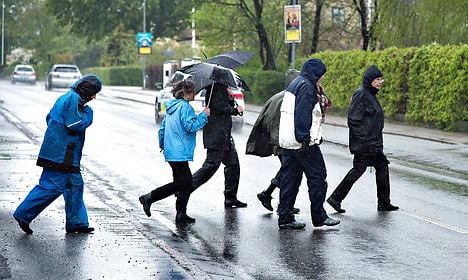 It's been a month in which jackets and umbrellas have been used more frequently than sunglasses and sandals. Photo: Henning Bagger/Scanpix
According to meteorology institute DMI, May 2015 is likely to be only the second year in the last 15 in which the average monthly temperature temperature will end below its historic norm.
“May has had, through and including Sunday the 17th, an average temperature of just 9.5C. With the current forecast, it looks like we will end at a maximum of 10.4C for the whole month. Thus May 2015 will be at least 0.4C under the 1961-1990 norm of 10.8,” climatologist Mikael Scharling said.
Since 2000, the only other year in which May temperatures were below the norm was in 2010 when the month had an average of 9.4C.
May 2015 feels especially cold when compared to recent history.
“The average for the last 14 months of May – from 2001-2014 – is 11.5 degrees. Therefore, 10.4 degrees feels considerably colder than what most people consider to be normal May weather,” broadcaster DR’s weatherman Mikael Jarnvig said.
Not only is May cooler than the norm, it also breaks a streak of 22 straight months in which the average monthly temperature has ended above the 1961-1990 historical average.

May breaks a streak of 22 months in which monthly temperatures ended above their historical average. Image: DMI
According to DMI, the warmest recorded May was in 1889 when the average monthly temperature was 13.8C, while the coldest was in 1902, with just an 8.1C average.