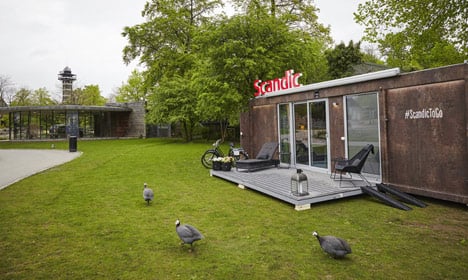 The winning bidder was given an overnight stay in Copenhagen Zoo in Denmark's first mobile hotel room. Photo: Magnus Klitten
Ever dreamt of walking out of your hotel room and directly into a zoo, the beach or a city food festival? Now that Denmark has its first mobile hotel, you will have your chance.
Hotel chain Scandic has brought its Scandic to Go concept to Denmark after making its debut in Norway and Sweden.
The first stop for the 18 square metre hotel was the Copenhagen Zoo, where an overnight stay was auctioned off to benefit endangered rhinos in South Africa. The winning bid of 7,000 kroner was good for an overnight stay on Saturday in the mobile hotel room, which was placed next to the zoo’s rhinoceros exhibit.
Auction house Lauritz donated its services for free, brining the total to 8,500 kroner, which Scandic then doubled for a total contribution of 17,000 kroner.
“Last year poachers shot just over 1,000 rhinos in South Africa alone and if we don’t take action we risk losing the last rhinoceros in the course of the next few decades. Therefore, we are extremely pleased with the massive enthusiasm for supporting this good cause,” Copenhagen Zoo director Bengt Holst said in a press release.
The mobile hotel will next go to Bornholm’s Hammer Harbour, where it will be available from June 16-21. From July 4-12, the hotel will be at the northern Jutland town of Klitmøller, which has been dubbed ‘Cold Hawaii’ for its surfing, and then head to Aarhus’s Food Festival, which runs September 4-6.
The hotel is also available to come to other locations based on customer requests.
“With Scandic To Go we want to give our guests the chance to open their hotel door and step right out into unique experiences in a place where there isn't normally a hotel. It's a new and different way to think about hotels,” Scandic Danmark spokesman Casper Puggaard said.
Scandic’s concept offers “a mobile hotel room that comes to you, wherever you are” and comes complete with a double bed, bathroom, outdoor terrace, free wifi and breakfast.
An overnight stay in Scandic to Go costs 1,950 kroner.