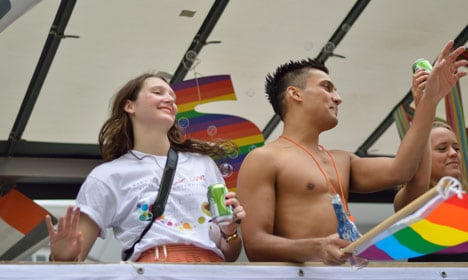 Denmark was ranked ninth, but is that worth celebrating? Photo: Colourbox
After looking at how well 48 different nations ranked on issues such as marriage equality, employment, adoption and medical treatment, the ILGA (European Region of the International Lesbian, Gay, Bisexual, Trans and Intersex Association) gave Denmark a score of 68 percent on its annual Rainbow Map.
While the result saw Denmark move up one spot from last year, it was topped by Scandinavian brethren Sweden and Norway, which took fourth and eighth place respectively. Iceland and Finland weren’t far behind at 12th and 13th.

Can you guess where your country is on our 2015 Rainbow Map? Check, compare, share! #rainboweurope pic.twitter.com/7JZgCRfNMi

ILGA-Europe spokesman Juris Lavrikovs told The Local that Denmark placed lower in the ranking than expected.
“Denmark was one of those where it was surprising to people that despite always being known as one of the more open countries, it was still lagging behind,” he said.
In 1989, Denmark became the first country in the world to recognize same-sex partnerships. Although same-sex church marriages weren’t legalized until July 2012, the nation is still widely seen as a forerunner in liberal acceptance.
“Surprisingly enough, Denmark was the last Scandinavian country to allow same-sex marriage. It took them awhile to catch up among Scandinavian countries,” Lavrikovs said.
Katrine Villarreal, a member of the Danish LGBT community, said that Denmark has rested on its laurels when it comes to gay and transgender policies.
“Danes are notorious for thinking that we are super tolerant when it comes to LGBT rights. People often talk about being the first country to legalize partnerships but that happened in 1989. We are way behind in 2015 compared to other countries,” she told The Local.
Villarreal said Denmark particularly lags behind when it comes to protection of the transgendered, a message echoed by LGBT Danmark.
The organization called the ninth place ranking “measly” and said that the primary reason Denmark didn’t perform better was “our politicians’ resistance to acknowledging gender identity as grounds for protection” in national anti-discrimination laws.
“We are in many ways front-runners in Europe. But on the other hand, we deserve [the ranking] because despite innumerable requests our politicians have not wished to adopt the protection of transpeople,” chairman Søren Laursen wrote on Facebook.
Denmark was praised in the ILGA report for “great steps forward” in the shape of its “progressive legal gender recognition law” designed to make it easier for transgender people to have their gender identity legally recognized.
See also: Hundreds of Danes using new sex change law
But Lavrikovs said “there can be discrepancies between what is said in legislation and policies and what the social acceptance situation is like.”
“Unfortunately while social acceptance is high, there are still reports of people attacking individuals,” he said.

Lots of legal and policy change = lots of movement on our #rainboweurope 2015 ranking, just have a look: pic.twitter.com/9mcXXTyhtc

The UK held on to its crown at the head of the table while Malta jumped eight places to come third. Armenia, Russia and Azerbaijan remained the bottom three nations.
“We witnessed several countries making historic strides, while others have stalled in terms of their equality development,” commented Paulo Côrte-Real, Co-Chair of ILGA-Europe’s Executive Board.
“The vital ingredient, present in so many of the countries who have climbed in our Rainbow Map rankings, was unshakable leadership from political figures and activist leaders, often in challenging contexts.”
The report also noted that recognition of the human rights of trans and intersex people came to the fore in a major way in 2014.
Meanwhile Estonia became the first former USSR country to officially recognize same sex unions by passing an historic cohabitation act and future marriage equality was approved in Finland and enacted in England, Wales and Scotland, the report noted.
Joyce Hamilton, Co-Chair of ILGA-Europe’s Executive Board said: “Homophobic and transphobic violence, hate speech and discrimination continue to be an everyday occurrence for some of our LGBTI neighbours. Let’s hope that 2015 will bring more examples similar to Malta and Estonia. Now more than ever, Europe needs political leaders to work with and for LGBTI people in Europe”.
In October, the venerable travel guide Lonely Planet ranked Copenhagen the most gay-friendly destination in the world.