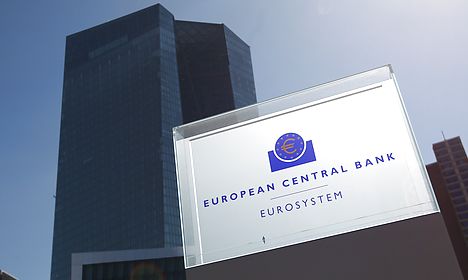 Membership in the banking union would give ECB regulators authority over Danish banks. Photo: DANIEL ROLAND/Scanpix
A report from the Justice Ministry released on Thursday states that the government does not consider joining the European Banking Union to be a loss of sovereignty and thus will not hold a referendum on Denmark’s participation in the common bank supervision.
"It is the Justice Ministry's legal assessment that the constitution does not require a referendum on Danish participation in the strengthened bank cooperation. This is particularly due to the fact that it will still be Danish authorities who will act in relation to credit institutions in Denmark," Justice Minister Mette Frederiksen said in a press release.
The ministry's report was accompanied by a joint press statement from Economy Minister Morten Østergaard and Business Minister Henrik Sass Larsen in which they state "it would be an advantage for Denmark to join the strengthened bank union".
"We are a small country with a large banking sector and participation in the banking cooperation can anchor an already strong regulatory and crisis management regime within a strong common European framework," their statement read.
Opposition group Danish People's Party criticized the ministry's conclusion on sovereignty and accused the government of moving Denmark "yet another step" toward adopting the euro.
"The government decided today that Denmark should join the eurozone's bank union. And without even asking the Danes first in the form of a referendum. The banking union is natural for euro countries so one must interpret the government's decision as yet another step in the direction of preparing for the introduction of the euro," party leader Kristian Thulesen Dahl wrote on Facebook.
"The Danish people have given a clear 'no' to the euro. Twice," he added.
Membership in the union would make Denmark subject to the EU’s Single Supervisory Mechanism, giving the European Central Bank the authority to oversee Danish banks, and the Single Resolution Mechanism, which puts the EU in charge of dealing with failed banks.
The Danish banks subject to the EU regulations would be those that have been deemed ‘Systemically Important Financial Institutions’, or SIFI.
SIFI banks in Denmark are Danske Bank, Nordea, Nykredit, Jyske Bank and Sydbank. These are the banks that would be subject to the controls of the European Central Bank.
An explanation of the European Banking Union can be seen here:
With the Justice Ministry ruling that membership in the banking union does not constitute a loss of sovereignty, Denmark’s inclusion in the union will not go to a referendum and instead will be left up to parliament.
See also: Denmark lays foundation for ending EU opt-out
Danish voters have already been promised a referendum on the nation’s relationship to the EU in the form of its opt-out on justice and home affairs rules.
That referendum, which both PM Helle Thorning-Schmidt and opposition leader Lars Løkke Rasmussen have promised will be held no later than March 2016, will ask Danes to vote on replacing the current opt-out with an opt-in model.