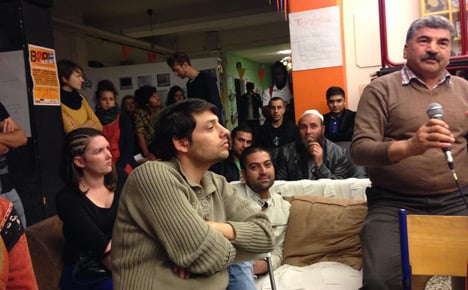 The festival begins Thursday at the Trampoline House, a cultural centre bringing together asylum seekers and Danes. Photo: Submitted
A coalition of groups working on asylum and migration issues is hosting a three-day festival to combat what they call “hostile political campaigns targeting minority groups” and Danish politicians’ “race to the bottom on immigration polices”.
The Asylfestival gets underway Thursday at the Trampoline House, a Copenhagen cultural centre where asylum seekers and Danes get together to socialize and learn from one another.
Organizers told The Local that the festival, which will be held in the shadow of Sunday’s mass drowning of migrants in the Mediterranean, will include lectures, workshops, film screenings and other events aimed at finding solutions to a complex problem.
“There are all kinds of different groups doing separate small things in Denmark, so we want to build a network and share ideas,” festival spokeswoman Nicole Domanski said.
“There is a lot of frustration out there about the fact that a lot of structural issues aren’t getting discussed but are instead over-simplified to black and white debates. Clouding complex issues with hyperbole only makes things worse,” she added.
Asylfestival organizers said that immigration is clearly going to be a major issue in the upcoming Danish elections, so they want to offer a counter narrative to what they see as misinformation.
“Asylfestival aims to balance the current discourse around refugees and migrants and explore ways of challenging the system and challenging this xenophobic rhetoric,” spokespeople Nanne Katrine Hansen and Lucien Diatta said in a statement.
“Many people are disgusted by the current state of affairs and concerned that things will only get worse and they’re developing creative and powerful ways to speak out against it. We want to bring these people together and build networks of resistance,” they added.
The Asylfestival kicks off Thursday at 3pm at the Trampoline House. The full programme can be found here.
Domanski said they expect around 1,000 participants over three days.
We're interested in highlighting your event. To promote an upcoming event, please provide a preview within a week before it takes place. To give a recap of a recent event, please send us a write-up and photos within three days after the event. In both cases, the text shouldn't exceed 300 words. Send submissions to [email protected]