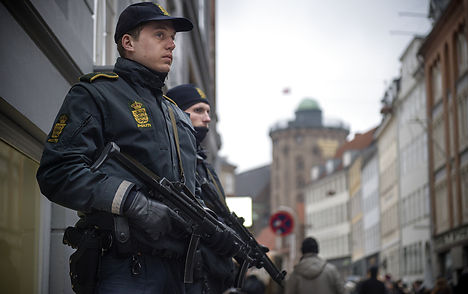 Police stand guard outside the synagogue on Krystalgade in the days after the shootings. Photo: Søren Bidstrup/Scanpix
In the days after 22-year-old gunman Omar El-Hussein killed two civilians and wounded several police officers, 53 percent of Danes in a YouGov poll conducted for Metroxpress said they feared a new attack.
In a poll released on Wednesday, that number had fallen considerably to 38 percent. Not only is that a 15 percent drop from the post-attack results, it also represents the lowest level of fear since a similar poll in February 2014, when just 21 percent of respondents said they were worried about a new terror attack.
“This shows that we won’t let fear win, which is perhaps the most important thing of all when something so terrible happens. This shows we won’t let fear control our lives,” MP Johanne Schmidt-Nielsen from the Red-Green Alliance (Enhedslisten) told Metroxpress.
El-Hussein opened fire at the Krudttønden cafe on February 14 during an event focusing on free speech and blasphemy. 55-year-old filmmaker Finn Nørgaard was shot dead outside the cafe. El-Hussein later killed security guard Dan Uzan at a Copenhagen synagogue in the early hours of February 15 before being shot and killed by police.
Timeline of Copenhagen attacks: Terror into the night
Since the shootings, there have been indications that El-Hussein, a 22-year-old Dane of Palestinian origin, did not operate alone. Five men have been arrested for allegedly helping the gunman obtain and get rid of the weapons he used in the twin attacks. All five had their custody extended last month for an additional four weeks.
Last week, Copenhagen Police confirmed that threatening notes had been found at Krudttønden and a memorial for Nørgaard warning of “a terror attack that will make what happened on February 14 look like a prank”.