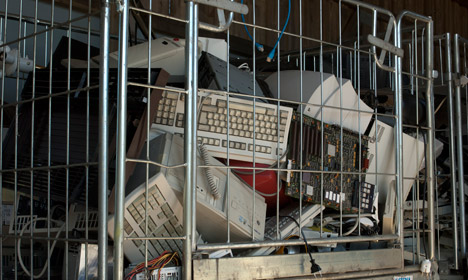 The biggest e-waste producers per capita are countries that pride themselves on their 'green' image. Photo: Colourbox
A record amount of electrical and electronic waste hit the rubbish tips in 2014, with the biggest per-capita tallies in countries like Denmark that pride themselves on environmental consciousness, a report said Sunday.
Last year, 41.8 million tonnes of so-called e-waste — mostly fridges, washing machines and other domestic appliances at the end of their life — was dumped, it said.
That's the equivalent of 1.15 million heavy trucks, forming a line 23,000 kilometres (14,300 miles) long, according to the report, compiled by the United Nations University, the UN's educational and research branch.
Less than one-sixth of all e-waste was properly recycled, it said.
In 2013, the e-waste total was 39.8 million tonnes — and on present trends, the 50-million-tonne mark could be reached in 2018.
Globally, Denmark produced the fourth-largest amount of per-capita waste last year, with 24 kilos per inhabitant.
Topping the the list for per-capita waste last year was Norway, with 28.4 kilograms per inhabitant, followed by Switzerland (26.3 kg per capita) and Iceland (26.1 kilos).
The biggest producers after fourth-place Denmark were Britain (23.5 kilos), the Netherlands (23.4 kilos), Sweden (22.3 kilos), France (22.2 kilos) and the United States and Austria (22.1 kilos per person each).
The region with the lowest amount of e-waste per inhabitant was Africa, with 1.7 kilos per person. It generated a total of 1.9 million tonnes of waste.
In volume terms, the most waste was generated in the United States and China, which together accounted for 32 percent of the world's total, followed by Japan, Germany and India.
Waste that could have been recovered and recycled was worth $52 billion (48.5 billion euros), including 300 tonnes of gold — equal to 11 percent of the world's gold production in 2013.
But it also included 2.2 million tonnes of harmful lead compounds, as well as mercury, cadmium and chromium, and 4,400 tonnes of ozone-gobbling chlorofluorocarbon (CFC) gases.
"Worldwide, e-waste constitutes a valuable 'urban mine' – a large potential reservoir of recyclable materials," UN Under Secretary-General David Malone said.
"At the same time, the hazardous content of e-waste constitutes a 'toxic mine' that must be managed with extreme care."
Almost 60 percent of e-waste by weight came from large and small kitchen, bathroom and laundry appliances.
Seven percent was generated by thrown-out mobile phones, calculators, personal computers and printers.