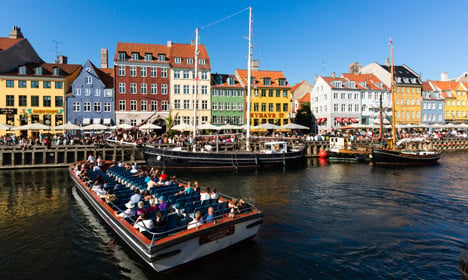 Between 2004-2014, Denmark struggled to fill tourist boats and hotel beds. Photo: Colourbox
The Little Mermaid isn’t cutting it. Foreign tourists are overlooking Denmark as an overnight destination to such a degree that only three other European countries have been worse at attracting guests over the past decade.
A study of European tourism between 2004-2014 carried out by the magazine Momentum showed that Denmark’s tourism growth over that period was a stagnant four percent, compared to a 25 percent growth average across 48 Organization for Security and Co-operation in Europe (OSCE) countries. Only Kyrgyzstan, Slovakia, Luxembourg and Cyprus performed worse than Denmark.
Over the ten-year span, Denmark was a much less appealing destination than the other Nordic countries. Iceland saw its tourism jump by 63 percent over the same period, while Finland and Sweden saw their overnight stays increase by more than 20 percent and Norway experience nine percent growth.
Overnight stays in Denmark fell every single year between 2004-2009. Although they have rebounded in recent years, the 23.3 million overnight stays in 2014 still did not match 2003 levels. Denmark’s numbers were particularly affected by a decrease in the number of German families choosing to overnight in Denmark.
See also: Denmark sees major boom in overnight stays
According to the assistant CEO of tourism organization Visit Denmark, the country needs to get better at offering more exciting options for tourists.
“The key to success is ensuring that international guests are aware that you have something attractive and interesting to offer. Peace and quiet in itself, which was enough [to attract tourists’ in the 1990s, became challenged in the 2000s, when there needed to be more obvious and accessible activities to attract families,” Lars Erik Jønsson told Momentum.
Susanne Nordenbæk, the head of tourism at the Danish Chamber of Commerce (Dansk Erhverv), said the Danish tourism industry is being pressured on several fronts.
“It has become cheaper to travel to far-off destinations and that is a new competitive parameter for Denmark. One also needs to realize that people’s travel behaviour has changed. Whereas one might have previously gone to one destination for three weeks, today people travel more frequently but for shorter periods. That can mean that we haven’t dropped in the total number of German tourists, but in the number of overnight stays,” she told Momentum.
Copenhagen doing well while coastal communities struggle
While tourism in Denmark is slow across the board, a representative of Wonderful Copenhagen told The Local that business is booming in the capital.
"Things have not slowed down for Copenhagen. City break tourism (short stays in cities for 2-3 nights) is a growing business and is driving growth in tourism in Denmark," Wonderful Copenhagen marketing director Birgitte Arendsdorf Olsen said.
"There is an international trend for travelling from city to city. We can see that in Copenhagen where we have seen steady growth for many years," she added.
Both Olsen and Jønsson said there is a lot of room for improvement in Danish coastal areas. A new plan focusing on tourism along Denmark’s coastlines has government granted coastal communities the right to build upon environmentally-protected stretches of the coast.
See also: Tourism plan focuses on Denmark's coasts
“It’s a good idea to develop existing structures and build restroom facilities and restaurants close to the water. Concrete, reasonable and sustainable projects that respect nature will be good if they can be done,” he said.
Olsen said that "tourists have been staying away from coastal Denmark because products and quality have not been able to follow international standards" and said that business could be boosted across the country by better collaboration within the tourism industry and more investments in marketing.
According to Momentum’s study, the OSCE countries that saw the largest increase in tourism were Armenia (97%), Georgia (92%) and Albania (86%).