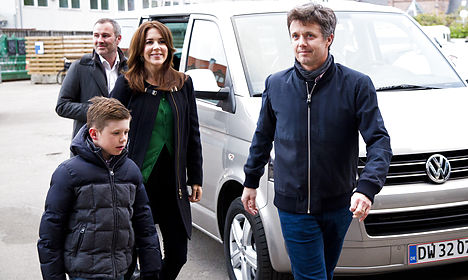 Crown Prince Frederik, shown attending a 2014 Justin Timberlake concert with Crown Princess Mary and their son Prince Christian. Photo: Martin Sylvest/Scanpix
A bodyguard from the Danish Security and Intelligence Service (PET) has been charged with violating traffic laws for his role in Crown Prince Frederik’s January journey over the Great Belt Fixed Link.
Frederik’s vehicle crossed the bridge while it was was closed to all other traffic due to hurricane-strength winds and raised water levels.
See also: Prince Frederik slammed for 'irresponsible' trip
The prince’s bridge trip created scores of headlines and was slammed as “completely unacceptable” and “completely irresponsible”. The furore over the fact that Denmark’s future king was allowed to cross the bridge while other motorists had to wait led both the Danish Royal House and PET to issue apologies.
On Monday, the Independent Police Complaints Authority (Den Uafhængige Politiklagemyndighed – DUP) said that a PET agent serving as a bodyguard for the prince would face charges over the journey.
“I can confirm that we have charged a bodyguard for violating the Danish Road Traffic Act [færdselsloven]. I have no further comment,” Niels Raasted, a DUP investigator, told Radio 24syv.
The agent is being charged for following Crown Prince Frederik’s vehicle across the bridge, while Frederik’s own driver and the prince himself avoided charges for the exact same trip.
That decision did not sit well with the lawyer from the Danish Police Union (Politiforbundet) who represented the PET agent.
“We have a monarchy and we have decided that we guard our royals. That means that the bodyguards have one single responsibility – to follow the Crown Prince. If he goes, the bodyguards follow. If he swims, they swim after him. If the Crown Prince bikes, then yes the guards bike after him. In this case, the bodyguard drove after the Crown Prince’s car, exactly as he is supposed to, and it is completely absurd that the guard is now being charged for doing his job,” Torben Koch told Radio 24syv.
Koch called it “judicial discrimination” that the PET agent was charged with Frederik’s driver was not.
Crown Prince Frederik's vehicle crossed the bridge, which connects Funen and Zealand, so that he could attend a gala event in Herning.
Leo Larsen, the head of bridge operator Sund og Bælt, said at the time that Frederik's vehicle went across the bridge without permission from the local police.
“There was a request from the royal vehicle to be allowed to drive to the other side of the barriers so that it could be 10-20 metres ahead of the other vehicles. We allowed that because the agreement was that they would stop and wait until the bridge was reopened. But they simply drove over it,” Larsen told Fyens.dk in January.
It remains unclear if Crown Prince Frederik himself gave the order to cross the closed bridge.