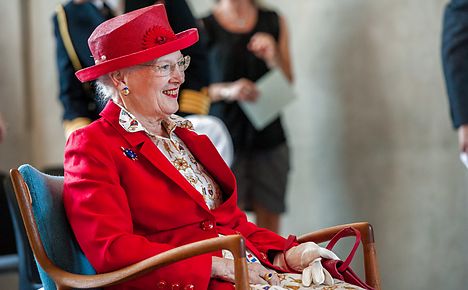 The queen said immigrants need to know what they're getting into when they come to Denmark. Photo: Henrik Rasmussen/Scanpix
Speaking about the state of affairs in Denmark in the aftermath of the February attacks in Copenhagen, Queen Margrethe said that Danes have kept their heads cool in the face of terror.
“They should know first and foremost that we are not scared. They want to scare us, but we will not let ourselves be scared. That is essential,” the queen told Berlingske.
The queen added that she is shocked by the increase in threats and harassment aimed at Denmark’s Jewish community.
“That Jews today are suddenly looked askance at, feel under pressure and under threat is shocking – because they are threatened. They carry it with great dignity, as they always have, but it a shocking thing to witness,” she said.
Queen Margrethe also waded in to the hyper-charged discussion of immigration.
Whereas the queen has previously urged her people to be welcoming and accepting of immigrants and refugees, she said in her new interview that it is important to “set requirements”.
“It is obvious that when a society accepts a lot of people from the outside, one must also set the requirement that they understand where they have come. We will make space [for them], but they have come to our society and they can therefore not expect that their old societal models can just be carried on in our country,” Queen Margrethe said.
“They can go to the mosque when they want – anything else would be unreasonable – but when they begin to do things that aren’t consistent with the overarching patterns of Danish society, they must realize that that will not do,” she added.
The queen said that newcomers need to accept Denmark the way it is, terrible weather and all.
“That November begins at the end of October and lasts until the end of March isn’t fun to experience when you come from a dry and warm climate. One can become sad from all of that greyness. But that is a premise of living here,” she said.
Like the weather, immigrants and refugees also need to accept Danish attitudes for what they are, the queen said.
“The mental climate that dominates Denmark from olden days is also a side of the climate, just like the wind and weather,” Queen Margrethe added.
See also: Queen bids refugees welcome in New Year's address
The queen, who in her New Year’s address made it a point to welcome newcomers to the country and urge Danes to “help them to feel at home in society”, said in her Berlingske interview that she still believes in an open and accepting Denmark.
“Yes, we should be accepting but we should also say what we expect. Because it is our society that they are coming to. We are an old society that is happy to take in the people who need it but we also need them to understand where they have come. I think that is very vital,” she told Berlingske.
The celebrations for Queen Margrethe’s 75th birthday got underway last week in Aarhus and will continue this week. There will be a dinner gala Wednesday evening in Christiansborg and on Thursday, thousands of Danes are expected to stream into Amalienborg’s courtyard for a glimpse of the queen on her big day.