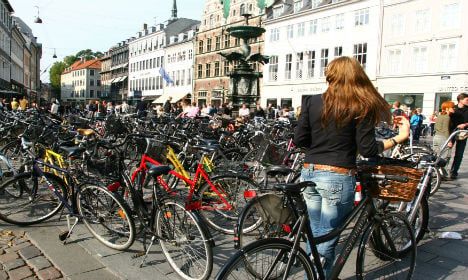 Denmark has been ranked second in a recent European study looking at air pollution and measures taken to reduce it. And the many bikes get a lot of praise. Photo: Colourbox

A total of 23 European cities were part of the study measuring air pollution. Copenhagen came in second, beaten only by Zurich, according to the European Environmental Bureau (EEA), a Federation of Environmental Citizens Organizations.

Zurich got the first prize for its commitment to reduce pollution from vehicles, the promotion of cleaner forms of transport and low levels of air pollution, according to the EEA.

“Both in Zurich and in the runner-up city, Copenhagen, the number of cars has been substantially reduced and there are restrictions on highly-polluting vehicles such as diesel cars, trucks and construction machines,” the EEA writes.

“At the same time, cleaner forms of transport, such as public transport, cycling and walking have been greatly expanded,” it continues.

Vienna and Stockholm third and fourth

After Zurich and Copenhagen, Vienna and Stockholm ranked third and fourth respectively in terms of “soot-free cities” in Europe, followed by Berlin.

Lisbon and Luxembourg featured at the bottom of the list as these cities’ efforts to tackle air pollution were considered “half-hearted,” according to the EEA.

The ‘Soot-free Cities’ ranking project evaluated nine transport-related categories, including the promotion of sustainable transport, traffic management, public procurement and economic incentives, such as congestion charges and parking, according to the EEA. The ranking also took into account how successful each city had been at reducing the pollution at its urban traffic stations.

The ranking concentrated on measures put in place in cities over the past five years and looked at air quality plans for the next five years to take into account changes that were already in the pipeline, it notes.