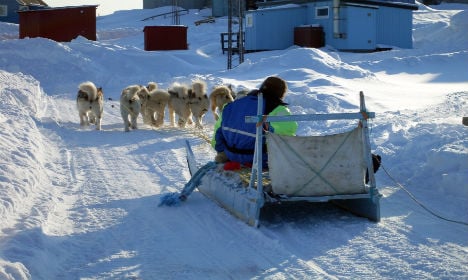 Young Greenlanders are leaving the island for better opportunities abroad, causing a brain drain to the fragile economy. Photo: Colourbox

As hopes fade for a commodities boom in Greenland, there is growing concern that an exodus of young people could cripple the economy of a territory already facing an uncertain outlook.

"People come down here to study and then they become so rooted that it's difficult to go back again," said Angunguak Egede, a 28-year-old Greenlander working as an office clerk for the Copenhagen municipality.

Together with a group of friends, Egede left home in 2004 for Denmark, Greenland's former colonial master and some 4,000 kilometres (2,500 miles) away, because "it was just the thing to do".

"If you go to the cinema in Nuuk, the capital, you have one option," Egede said in a bustling Copenhagen coffee shop.

The same goes for the number of jobs available and higher education. "In general there is just much more to choose from in Denmark," he said.

Over the past 25 years Greenland has had an average annual net emigration of 500 people, many of whom are young and well educated.

With a population of just 55,000 and widespread social problems, it is an exodus the Arctic territory can scarcely afford, as a 2012 survey found that 62 percent of 16 to 18-year-olds had dropped out of school.

Greenland Prime Minister Kim Kielsen told AFP that there "should be no doubt that we want our young back to Greenland after an education in Denmark or abroad."

To that end, financial aid has been made available to help them repay student loans if they return, and Greenland job fairs held in Denmark's major cities, he said in an email.

Twisting a single polar bear claw that he wears around his neck, Egede said he wants to move back to Nuuk at some point. He just doesn't know when.

A 2009 agreement allows Greenland to secede from Denmark completely, but to do that it needs to wean itself off an annual 3.6 billion kroner (483 million euros, $526 million) subsidy from Copenhagen, representing more than half of the home rule government's budget.

Adding to its problems is what observers call "the death gap" — a widening chasm between a shrinking economy and the rising cost of an ageing population. Kielsen's predecessor Aleqa Hammond, who had to step down in September following a corruption scandal, had promised economic independence from Denmark based on exploitation of the territory's oil and mineral riches, but the plunging price of commodities has put a damper on those plans.

The territory's unemployment rate, twice that of Denmark's at around 10 percent, mostly affects unskilled workers and there is demand for those with an education in some sectors, Kielsen said.

However, he admitted that if the economy continued to deteriorate it could eventually lead to even higher emigration.

"But that is currently not believed to be the case," he said.

But Torben Andersen, an economics professor and the head of the Economic Council of Greenland, said there was already "an element of brain draining."

The most common reason for Greenlanders to move to Denmark was to pursue an education not available at home, followed by those moving for jobs, he said.

"Up until now we have seen that emigration patterns mirror economic development," he added.

Thomas Johansen, a 28-year old engineering student in Copenhagen from the western Greenland town of Ilulissat, said many young Greenlanders in Denmark felt "a certain responsibility to give something back to Greenland" but that at the same time "there are better opportunities abroad."

"I think it's a problem. I think there is a brain drain," he said.

Naja Motzfeldt, a 28-year-old management student, said that after her studies she planned to go back to the southern town of Qaqortoq with a population of just 3,200.

"I know a few people who plan to stay here. They don't see any future in returning to Greenland," she said.

But as much as jobs it was the Danish lifestyle that was keeping them from returning, with Greenland sometimes feeling "very small", she added.

"Everyone knows each other and rumours spread quickly. Things can also get bit boring, you can't just drive from one town to the next like in Denmark. You have to sail or fly," she said.

As for herself, she said any culture shock upon returning from the Danish capital would be manageable.