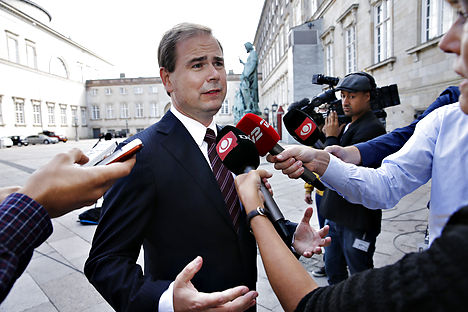 Defence Minister Nicolai Wammen. Photo: Jens Astrup/Scanpix
Danish police have arrested two men over planning an attack against the country's defence minister, Nicolai Wammen, local media reported on Thursday.
The two, of Somali and Pakistani origin, were detained when police on Wednesday searched a number of apartments in the Copenhagen area.
They faced preliminary charges of planning an attack against Defence Minister Nicolai Wammen, daily Ekstra Bladet wrote.
The tabloid said it had been in contact with one of the men, who were not being charged with terrorism but under a paragraph barring the "attacking or coercing of … the government or ministers."
Both were released from custody on Thursday.
Police declined to comment on the report, but lawyers Bjørn Elmquist and Andro Vrlic said they each had been asked to represent one of the suspects.
Elmquist told AFP that since there had been no request for a custody hearing, which is required in Denmark to jail someone for more than 24 hours, the charges "maybe aren't too serious".
The Danish defence minister has been under police protection since 22-year-old gunman Omar El-Hussein shot dead a filmmaker and an unarmed Jewish security guard outside a synagogue in twin attacks in the Danish capital on February 14 and 15.
The Danish Security and Intelligence Service (PET) began a probe a few weeks ago "based on observations around Nicolai Wammen and his residence," Ekstra Bladet wrote.