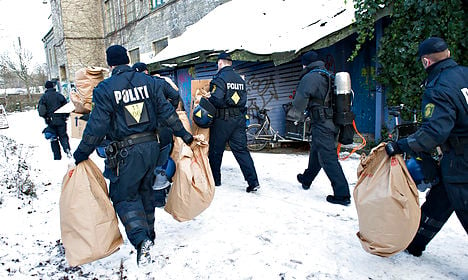 A file photo shows an unrelated police bust in Christiania in January 2013. Photo: Jens Nørgaard Larsen/Scanpix
An additional 13 men were jailed Tuesday in the ongoing trials related to Denmark’s largest ever cannabis case.
The Copenhagen City Court sentenced the 13 men, who range in age from 28 to 53, to a combined 29 years and seven months behind bars. Individual sentences ranged from 21 months to three years.
The men were found guilty of selling between 125 and 260 kilos of cannabis in Christiania’s Pusher Street.
The new sentences came the day after 16 individuals were sentenced to a combined 49.5 years in prison. In January, seven other men were found guilty and sentenced to a total of 32.5 years in prison.
Three more court cases are still to come from the March 2014 police raid in Christiania, a former hippie commune in the heart of Copenhagen that is now the centre of a billion-kroner cannabis industry.
As it did on Monday, the court ruled on Tuesday that Christiania’s cannabis market is an “organized” operation.
“Prosecutors have proven that the cannabis trade in the area around Pusher Street in Christiania is organized and that the accused, all of whom were present in Christiania’s stalls for many days over an extended period, could not have been unaware that sales from a stall were part of the overall organized operation,” Tuesday’s ruling read.
In addition to the prison sentences, the men had a combined 6.35 million kroner confiscated.
The court estimated that each stall Pusher Street makes a profit of around 10,000 kroner every day.
Seven of the 13 men immediately appealed against the verdict while the other six requested time to consider an appeal.
A total of 77 individuals face criminal charges as a result of the March 2014 bust. Another three court cases are expected to be decided this week.