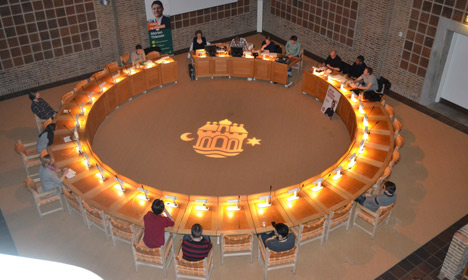 The event was held in the Aalborg City Hall. Photo: Submitted
March 19th will go down as a historic day in the annals of Aalborg, as it represents the culmination of past efforts to make the city more international.
Five political parities participated in a political debate entitled EU Mythbusters, a first-of-its-kind event held in English so that everyone in the local community – Danes and internationals alike – could be involved.
The city, Denmark’s fourth largest, is soon to make another important step with the opening of its International House.
According to the group Young Europeans in Northern Denmark (Europaeisk Ungdom Nordjylland) “the international community has come a long way in Aalborg”.
“Dozens of our international members are active in all kinds of local organizations, including political ones, and with that they help bring change into the local community. There is no better way to change a society for the better than through active citizenship and volunteerism, the cornerstones of Danish culture,” Europaeisk Ungdom Nordjylland president Narcis George Matache said.
Over 100 people participated in the debate, with numerous national backgrounds present.
The debate focused on three main issues: welfare tourism, multiculturalism and social dumping.
“These issues were discussed from every angle by the five politicians in the debate, and in the end the public verdict was that welfare tourism was just a myth, multiculturalism is not destroying the Danish culture, and social dumping is mainly caused by greedy employers,” Matache said.
After the event, Europaeisk Ungdom Nordjylland reported that it received a lot of positive feedback from people who have been hurt by the integration debate and the untruths that are being used in order to create fear in the hearts of the Danish citizens. They were glad that they had received respect and that they were heard by the Danish politicians.
The participating politicians were Ole Christensen (Social Democrats), Jacob Klivager (Socialist Peoples’ Party) and Giajenthiran Velmurugan (Social Liberals – Radikale), Cæcilie Andersen (Red-Green Alliance – Enhedslisten) and Martin K. Madsen (Liberal Alliance). We're interested in highlighting your event. To promote an upcoming event, please provide a preview within a week before it takes place. To give a recap of a recent event, please send us a write-up and photos within three days after the event. In both cases, the text shouldn't exceed 300 words. Send submissions to [email protected]