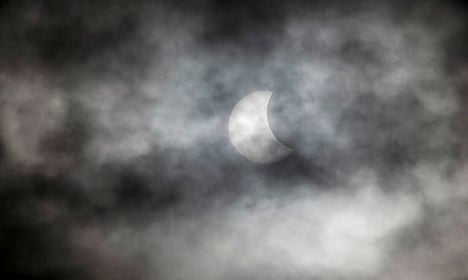 For most in Denmark, this was about as good as it got. Photo: Palle Peter Skov/Scanpix
Even though we knew it was likely to happen, it was still hard not to be disappointed by the heavy cloud cover that robbed most of Denmark of a chance to get a good look at the biggest eclipse event in over 50 years.
The Local’s team outside of Copenhagen spent the better part of the morning trying in vain to even find the sun's location in the sky. After all, it’s awfully hard to see an eclipse if you don’t know where to look. Just when we thought our efforts were for naught, a hole parted and we caught a glimpse of the eclipse shortly after its peak at around 10.45am:

This sad photo of the two seconds we could actually find the sun summarizes our eclipse disappointment. pic.twitter.com/nwByfAPIhH

In the Faroe Islands, one of only two spots in the world to see the full eclipse from land, cloud cover also obscured the view. But as can be seen from the below time-lapse from TV2, there could be no doubt that the islands were plunged into total darkness at precisely 10.42am. (Note, you'll have to be logged in to Facebook for the video to play)

Post by The Local Denmark.
The Local was far from the only media outlet to be disappointed by the eclipse over Denmark. Information newspaper offered this tongue-in-cheek look at “nature unleashing its powers”:

Over at Berlingske, editor-in-chief Tom Jensen posted a photo likening Friday’s eclipse to “an average November day”, a sentiment that was popular across Twitter:

Outside of Copenhagen, things were a bit better as evidenced by the below photos from Stubbekøbing on the island of Falster and Vojens in southern Jutland. The eclipse seen from Odense. Photo: Amelia-Elena Rotaru
Some people were determined not to let the clouds rob them of the eclipse experience. Here was The Local reader Marcello Manca’s genius response to the disappointing weather conditions over Copenhagen:

Post by Marcello Manca.
Maybe the group of Danes who dropped 7,400 kroner on a plane ticket to take them above the clouds to see the eclipse had the right idea.
The 50 die-hard Danish eclipse watchers watched the event miles above the Faroe Islands from a Boeing 737 chartered by a science magazine.
"It was so beautiful, I think it was the most beautiful solar eclipse I've ever seen," John Valentin Mikkelsen, a 63-year-old teacher from Aarhus told AFP.
"We saw Baily's beads," he said, referring to a light show caused by the moon's rugged surface allowing sunlight to shine through in some places during a total eclipse.
"It was beautiful, it was awesome," he added, with almost spiritual reverence.
The Faroe Islands and Norway's Arctic Svalbard archipelago were the only places on Earth where the less than three-minute total eclipse was visible.
"We had clouds… but it was still fantastic," said Ole J. Knudsen, an astrophysicist from Denmark’s Aarhus University, who watched from hills high above the Faroes' capital Torshavn.
"For 20 to 30 seconds the sky was covered and it became dark and there was a collective shock that you could hear from all the spectators," he said.
More than 8,000 tourists had gathered in the Faroes, a Danish autonomous territory in the North Atlantic.
Denmark gets its next chance to see an eclipse in six years, although only a maximum of 33 percent of the sun will be covered. A total eclipse will be seen over Denmark in May 2142. Don’t feel too depressed that you’ll be long dead by then. It will probably be cloudy that day anyway… People at Planetariet in Copenhagen wondering "I wore these silly glasses for this?!?". Photo: Nikolai Linares/Scanpix