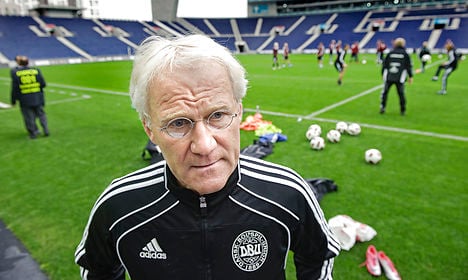 Morten Olsen will be done as national coach no later than next summer. Photo: Jens Nørgaard Larsen/Scanpix
Denmark coach Morten Olsen said on Tuesday he will step down after next year's European championships, when his contract with the Danish Football Association (DBU) expires.
"It's an emotional decision that you eventually have to take," he told reporters at a press conference.
"I have a good feeling about my decision, for two reasons: I do not want the distraction of people discussing 'will he or won't he stay.' And it gives DBU more time to find the right replacement," he said.
The 65-year-old has steered the national side through 156 matches, a remarkable run given the longevity of most football managers.
The Euro 2012 tournament was the fourth time he guided the Danes to a major championships since taking over in 2000, but he failed to qualify the team for the 2014 World Cup in Brazil.
The coach, who won three Belgian titles with Anderlecht as well as the 1983 UEFA Cup as a player, was a stylish sweeper in a talented and exciting Danish side that reached the 1984 Euro semi-finals and the second round of the 1986 World Cup.
He went on to win 102 international caps before retiring in 1988.
Denmark are ranked first in the Euro 2016 Group I qualifiers, ahead of Portugal, Albania, Serbia and Armenia but are the only team in the pool to have already played four matches.
The national team is currently embroiled in a bitter pay dispute with the DBU that threatens to jeopardize Denmark's friendly against the United States on March 25th.