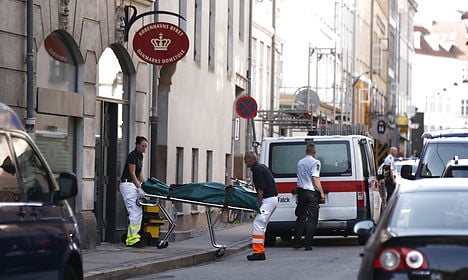 The 67-year-old has admitted to shooting a lawyer and his former son-in-law. Photo: Jens Astrup/Scanpix
The 67-year-old man who opened fire in a Copenhagen courtroom in September, killing a lawyer and seriously wounding his former son-in-law, attempted to explain his actions in court Monday.
The man, whose name is being withheld from the press, shot and killed 57-year-old lawyer Anders Lindholt and seriously injured his own former son-in-law, aged 31.
See also: Parental rift behind fatal Copenhagen shooting
Appearing at the Frederiksberg Court on Monday morning, the man said that he took his actions because of the bitter dispute over parental visitation rights between his daughter and her ex-husband.
“I did it because the case had been going for over a year. I was taking around 20 pills a day and I largely hadn’t slept in a year,” he said in court, according to news agency Ritzau’s account.
The man said that although he sawed off the end of a rifle the day before so that it would fit in his bag when he went to court the next day, he wasn’t “100 percent sure” that he would kill Lindholt until an argument with the judge in the case pushed him over the edge.
“He yelled at me that he is the one who decides because it is his courtroom and that I shouldn’t talk like that in the courtroom. He yelled that if I don’t do what he says, I couldn’t come to the next meeting. That’s when I thought that there were no other options. Now the case is out of hand,” he said.
The 67-year-old then fired two shots at his former son-in-law and two shots at Lindholt, who died at the scene.
The man said he blamed his son-in-law for everything.
“He has smeared the family for a long time. I loaned him several thousand kroner to let him move on with his life,” he said.
The September 16th shooting took place inside a court (Fogedretten) that handles cases involving the enforcement of visitation rights, debt payments, and foreclosures. The court is located near Copenhagen’s City Hall Square (Rådhuspladsen).
See also: Grandfather admits to fatal Copenhagen shooting
The 67-year-old immediately admitted to the shooting. The case against him is scheduled to continue through March 19th and the accused man said he expects to receive a mild punishment “on the grounds of extraordinary circumstances”. Prosecutors, however, are pushing for a life sentence.
The September shooting set off a national debate about the level of security at Danish courts. As a result, a trial programme will implement security controls at five city courts nationwide.