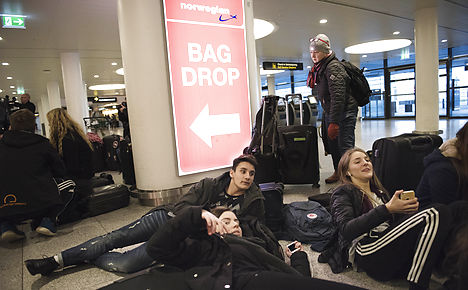 Danish students who were supposed to go to Prague were left stranded in Copenhagen Airport on Wednesday. Photo: Erik Refner/Scanpix
Low-cost airline Norwegian Air Shuttle (NAS) said it had cancelled all flights in Scandinavia on Wednesday due to the escalation of a pilots' strike.
The decision could affect more than 35,000 passengers, the carrier — Europe's third-largest budget airline — said in a statement.
Some 70 pilots stopped work after the failure of negotiations on a collective agreement Friday night and their industrial action would be extended to include 650 pilots from Wednesday.
"Despite repeated attempts by management to engage in constructive discussions to prevent a hardening of the strike, dialogue was was not possible," the Norwegian airline said.
"This unfortunately leads to the cancellation of all domestic flights in Norway, Sweden and Denmark tomorrow, Wednesday, March 4. All departures between Scandinavian capitals are also canceled," it added.
The Norwegian pilots, employed by its subsidiary Norwegian Air Norway, want to maintain tight organizational links with the parent company in the hope of safeguarding their jobs and to standardize salary conditions for all pilots employed in the various Scandinavian subsidiaries.
NAS, which last year suffered its first loss in eight years, is looking to reduce the costs and benefits for pilots, and increase job flexibility.
The Norwegian strike hits passengers just two days after cabin personnel working for fellow Scandinavian airline SAS returned to work after their four day strike which led to dozens of cancelled and delayed flights in and out Copenhagen capital over the weekend. SAS also experienced a short-lived strike by baggage handlers last week.