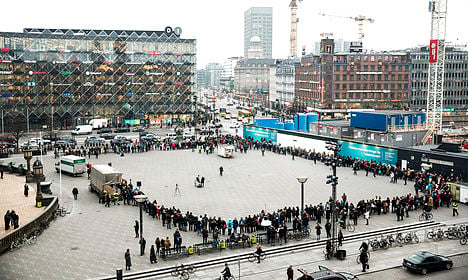 The new charges were filed the morning after around 300 people turned out for a 'peace ring' in central Copenhagen. Photo: Nikolai Linares/Scanpix
An 18-year-old man, was charged on Saturday with helping Copenhagen gunman Omar El-Hussein obtain a bulletproof vest and a knife, court officials said.
The defendant, dressed in khakis and a red sports jacket, denied the charges before his custody hearing held behind closed doors, news agency Ritzau reported.
"He is accused of helping the attacker and will be detained for 26 days," Jens Stausbøll of Copenhagen district court told AFP.
The man was identified Friday by public broadcaster DR as the younger brother of gunman Omar El-Hussein, a Dane of Palestinian origin who killed two people in the capital last month.
See also: Third man arrested in Copenhagen shooting
Three accomplices in all have been detained for allegedly helping the gunman, who was shot dead by police in a pre-dawn shootout following the attacks.
Two men — arrested in the immediate aftermath of the February 14-15 shootings — have been charged with hiding El-Hussein after his first attack and helping him obtain and get rid of weapons, Stausbøll said.
Armed with an assault rifle, El-Hussein fired 28 bullets a cultural centre hosting a seminar on free speech and Islam. He later opened fire at a synagogue, killing an unarmed Jewish security guard.
The charges against the 18-year-old man came the day after around 300 people attended a peace vigil in central Copenhagen organized by the Danish Muslim group The Network.