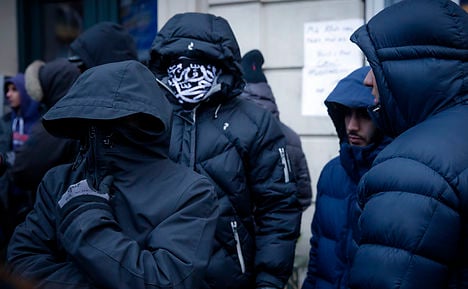 There have been various displays of apparent support for the Copenhagen gunman, including this group of young men who prayed at the spot where he died. Photo: Jens Astrup/Scanpix
A Danish man whose Facebook comments appeared to back the gunman behind the deadly Copenhagen attacks will not face charges of condoning terrorism, a prosecutor said Thursday.
The unidentified man had posted comments including "Je suis Omar" and "We are all Omar" on his Facebook page, referring to Omar El-Hussein, who killed two people in the twin shootings on February 14 and 15.
"Rest in peace our dear brother Omar Abdel El-Hussein," he wrote in a caption to a picture of El-Hussein, which included in Arabic the phrase "May Allah have mercy on you".
Prosecutor Jan Reckendorff said the 27-year-old "has explained that the Facebook announcement in no way was meant as support for the presumed perpetrator" and that he had denounced the attacks.
The prosecution had also taken into account the fact that the man had deleted the posts after realising they were "creating a stir," Reckendorff said in a statement.
Under Danish law, condoning terrorism is punishable with a fine or up to two years in prison.
The prosecution service said it was looking into "a large number of cases" where individuals had expressed sympathy for terrorist acts or made death threats or other punishable remarks against "individual communities".
Denmark's Jewish community has been on edge since the attacks in which a Jewish man and a filmmaker was killed, and Muslim groups have reported a rise in the number of hate crimes targeting Danish Muslims.
French comedian Dieudonne is on trial on charges of condoning terrorism over a comment suggesting he sympathised with of one of the assailants in the January shooting spree in Paris.