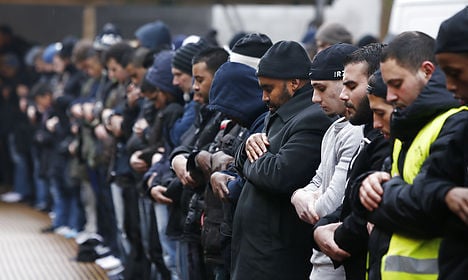 Men take part in Friday prayers at the Islamic Society of Denmark before Omar El-Hussein's burial outside of Copenhagen. Photo: Jens Alstrup/Denmark
22-year-old Omar El-Hussein — identified by police as the shooter behind two fatal shootings last weekend —  was buried at a Muslim cemetery in the Copenhagen suburb of Brøndby despite objections from the Islamic group that owns it.
The group said it had considered denying a request by El-Hussein's parents of to have him buried in the group's Muslim cemetery, but that its rules did not allow for it.
"My concern is over extremist attitudes and actions on both sides," Ahmet Deniz, head of the Islamic Burial Fund's support group told Jyllands-Posten. "Both from his friends and from young Danish people who perhaps could also riot later."
The ceremony took place at the Islamic Society of Denmark in Copenhagen following Friday prayers and was followed by the burial outside the city. Police estimated that at least 500 people attended the burial service.
Two people — a documentary maker and a volunteer security guard at Copenhagen's main synagogue — died in two separate shootings last Saturday and Sunday.
Friday's funeral was open to the public but according to a report from wire service Ritzau was mostly attended by young men, who were described as "wearing large black coats with many of them having covered their faces".
Copenhagen Police sent out a press release prior to the service urging anyone attending to "show appropriate respect" while Kasem Said Ahmad, who conducted the burial ceremony, told Jyllands-Posten that he would require everyone to "remain silent".
Ahmad rejected media suggestions that a large turnout at the funeral would be a sign of support for the alleged killer.
"It is support for the family, not for him," he said. "I do not think that anyone is coming to pay homage to him."