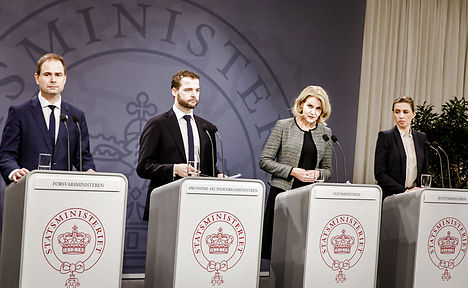 (L-R) Defence Minister Nicolai Wammen, Interior Minister Morten Østergaard, PM Helle Thorning-Schmidt, and Justice Minister Mette Frederiksen. Photo: Simon Skipper/Scanpix
In the aftermath of the twin shootings over the weekend that shocked the nation, Danish Prime Minister Helle Thorning-Schmidt on Thursday presented a new 12-point plan to combat terror.
“Our security level is high. Preparedness is high. But we are also challenged. Militant Islamists are constantly developing new ways of challenging our security,” the PM said at a press conference where she was joined by her ministers of justice, defence and the interior.
The plan will enable the intelligence services to better monitor Danes travelling abroad to fight with Isis, while also targeting the radicalisation of prisoners in jails.
"We want to strengthen our ability to gather and analyse [information] about terror planning abroad," Thorning-Schmidt said. "We want to ensure that the intelligence service is able to monitor Danes who travel abroad to take part in extremist activities."
Nearly half the amount earmarked for the four-year plan will be spent by military intelligence, focusing mainly on activities abroad.
A total of 110 Danes have travelled to Syria to fight in the civil war, making the country the second largest source per capita of European jihadist fighters in the Middle East, after Belgium. Many are believed to have returned home afterwards.
The government entitled its new terror package ‘A strong defence against terror’. It features 12 concrete initiatives ranging from anti-radicalization efforts in the nation’s prisons to increased data gathering on airline passengers and increasing security capabilities for both the police and security agency PET.
All told, the government is committing 970 million kroner ($148m) over the next four years to the initiatives.
“We live in a world in which violent forces want to attack our democracy and our freedom. We saw that with the terror attack in Paris in January 2015 and with the attack in Copenhagen last weekend,” the government’s plan reads.
“The government will always defend Denmark and ensure the safety of our residents […] New challenges require new tools. The government will therefore enhance and strengthen Denmark’s defence against terror,” it continues.
The 12 initiatives are:
1. 200 million kroner to the enhancement of police and PET surveillance capabilities
2. 150 million kroner to increased IT and analysis capabilities
3. Expansion of bodyguard corps
4. Access to relevant information on airline passengers
5. Research into the possible registration of calling cards
6. 415 million kroner to the Danish Defence Intelligence Service (Forsvarets Efterretningstjeneste) for obtaining and analyzing information on terror threats abroad
7. Strengthen efforts against Danish extremists abroad
8. Development of PET’s special forces unit
9. Strengthened around-the-clock efforts from the Danish National Police (Rigspolitiet)
10. New initiatives to prevent radicalization in correctional institutions
11. Strengthened preventive efforts in the Middle East and north Africa
12. A commission to evaluate Denmark’s terror-fighting efforts
The government's full plan can be viewed here (Danish).