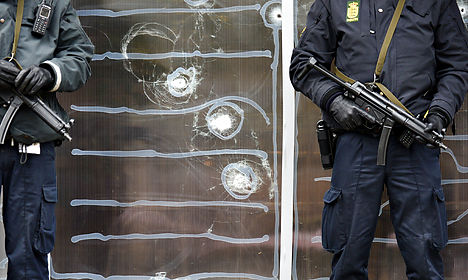 Copenhagen Police outside of Krudttønden on Monday. Photo: Søren Bidstrup/Scanpix
A police source speaking to the Swedish newspaper Sydsvenskan said that there were two police protection officers at the Krudttønden cultural centre in Østerbro to guard controversial Swedish cartoonist Lars Vilks, who has had round-the-clock security ever his drawing of the Prophet Muhammad was published in a local Swedish paper in 2007 with an editorial on the importance of freedom of expression.
See also: Vilks: 'Of course I don't have a responsibility'
The source said that one of Vilks' defenders shot at the gunman who carried out the attack, which took place as the Lars Vilks Committtee discussed ‘art, blasphemy and the freedom of religion’. The gunman killed 55-year-old filmmaker Finn Nørgaard at the scene before killing 37-year-old Dan Uzan at a synagogue hours later.
"I know that one of them emptied his entire gun," the police source told the paper, adding that this had "interrupted the attack" and suggesting that it may have prevented further casualties.
Neither the Danish police nor police in southern Sweden have confirmed the claims to other Swedish media.
"It's no secret that Swedish police were present," Stefan Ray, a press spokesperson for Sweden's police told The Local.
"They were there to protect Lars Vilks. But we cannot say who fired or who did what. There is a forensic investigation going on in Denmark that we have to respect."
TIMELINE: How the Copenhagen attacks unfolded
"I want to say this: they performed admirably and we are proud of how they acted in this very difficult situation," Jarl Holmström, Deputy Regional Director for Skåne police, told Sydsvenskan.
The gunman, who police formally identified on Tuesday as 22-year-old Omar Abdel Hamid El-Hussein, was shot to death by police following the second attack.