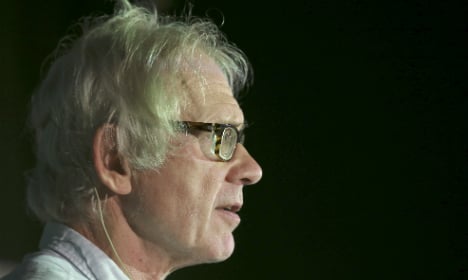 Vilks was speaking at a debate on Islam and freedom of expression when a gunman fired a volley of shots into the Krudttønden cultural centre, leaving a 55-year-old man dead and three police officers wounded.

The 68-year-old artist has also survived a foiled assassination plot and other attacks since his drawing of the Muslim spiritual leader was published in a local Swedish paper in 2007 with an editorial on the importance of freedom of expression.

The cartoon prompted protests by Muslims in the town of Örebro, west of Stockholm, where the Nerikes Allehanda daily is based, while Egypt, Iran and Pakistan made formal complaints.

Vilks lives under police protection. While Danish security forces indicated Saturday's attack had been "planned", police said it was not clear whether any particular person had been the target.

His famous drawing appears on the website of his Danish support committee, which had also announced he would be attending the debate on the relation between art, blasphemy and freedom.

The committee awarded French magazine Charlie Hebdo a prize last year given to those it views as the greatest defenders of freedom of expression.

Last month the satirical weekly was targeted by Islamist gunmen, who shot 12 people dead at the publication's Paris offices including several of its cartoonists.

His escape will stir familiar memories for Vilks: in January 2014 an US woman nicknamed "Jihad Jane" was jailed for 10 years for agreeing to murder him, believing her American citizenship and appearance would help her blend in as she attempted the killing.

Colleen LaRose travelled to Europe and tracked Vilks online in an effort to complete the crime, but was unsuccessful.

Prior to that plot, two brothers of Swedish nationality but Kosovar origin were jailed when their personal items were found outside the artist's house in May 2010 after it was attacked with Molotov cocktails.

Although the fire blackened some of the house's exterior it went out on its own without causing much damage. The artist was not at home at the time.

That same week, Vilks was head-butted by a man while others shouted and attempted to attack him when he was giving a lecture at Sweden's Uppsala University.

The attack occurred as he was showing a film by an Iranian filmmaker depicting two homosexuals disguised as Muhammad.

Also in 2010, seven Muslims were arrested in Ireland over an alleged plot to assassinate the artist, who had a $100,000 bounty on his head from an Al-Qaeda-linked group.

And four men were accused of plotting to kill him at a Gothenburg art fair in September 2011, though they were later acquitted.

"I try to keep my cool. On the bright side, the people who are after me are probably ill-equipped — these are amateurs," he told AFP in 2010.

"I'm not a fanatical racist, I do not have a political position. I am an artist who seeks the limits," he said.

"I think this is very important, if one wants to talk about freedom of expression and Islam and Muslims, to have a real position to have something sufficiently provocative and transgressive enough to start a debate."