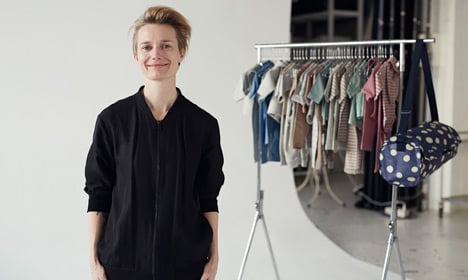 Vigga Svensson said she has made her circular idea become reality. Photo: Submitted
Vigga Svensson was behind the internationally-successful Danish kids’ wear brand Katvig but she was disheartened by seeing her green products sold into a ‘non-green’ environment. So she launched Vigga a new concept that sells organic children’s clothes through a unique circular subscription service in which subscribers receive larger sizes when their children can no longer fit their clothes. Those too-small clothing items are then in turn passed on to a different child who can fit them.
How did you come up with this business idea?
For ten years, my partner (and husband) Peter and I ran the successful Danish kids' wear brand, Katvig. It was internationally acknowledged for its sustainable pioneering work and was nominated for, and won, several prizes. However, we were frustrated to see how our green product was sold into a very 'non-green' market, where the clothes were used very few times. Several studies from the UK, US and Denmark have shown that people wear their clothes just a few times – sometimes as little as six –before they throw them out or put them away.
This is in large part because because buying new clothes is just so cheap. And when it comes to children's clothing, it’s even worse, because even if you aim to be a responsible consumer, you are forced to take part in the crazy consumer race as a parent as your child grows up but her clothes don't. That leads to a massive waste of money and resources. Our frustration led to the development of Vigga.us, a concept standing on two legs: a sustainable and high-quality designer brand for kids and an innovative circular subscription service. The latter solves both problems: You save a lot of money as a subscriber and we reduce the footprint by up to 80 percent.
What were the initial challenges?
How did you overcome them? At the outset, our biggest challenge was to believe in such a disruptive concept. When we got the idea, we thought that it was a very interesting project but not very realistic. So changing our own mindset was quite a journey. Through countless discussions with many clever people, we finally felt encouraged to go for it.
How has the journey been so far?
It has been a very interesting, encouraging and inspiring journey for us. From the beginning, we have been very open about our idea and that attitude has been very fruitful. I still remember a phone call from a Danish environmental consultant, who said: “This idea is so good, you have to do it!” Meeting former Denmark’s former environment minister, Ida Auken, was also a personal milestone.
Last June, Vigga received a pledge of 2.2 million kroner from the Danish Business Authority’s (Erhvervsstyrelsen) Fund for Green Business Development to support further development of this sustainable concept. In addition, Vigga.us has a Global Organic Textile Standard (GOTS ) certificate that secures a production free from harmful chemicals and unnecessary burdens to the environment and the suppliers hold a certificate that secures decent working conditions. Other great milestones include meeting a subscriber on the street, receiving a super happy email from a mother or having a subscriber change from one size to the next for the first time.
How has becoming an entrepreneur changed you, personally?
I have been an entrepreneur for so many years now that I don’t remember how life was earlier. But when I talk to people who are employed, I see a huge difference. It is mainly about feeling secure, I guess, while I have to find security within myself. It definitely takes some courage to be an entrepreneur – and a great deal of general trust.
Any other personal reflections and/ or message to budding entrepreneurs?
My best advice is to share your good idea with others. Spread the word and listen to the reactions and inputs, so as to benefit from other people's experiences, opinions and networks. I find that many entrepreneurs are very anxious to share what they have in mind. My own experience, however, is 100 percent positive. Unless you have invented a gizmo that can be patented, let the entire world know what you're up to.