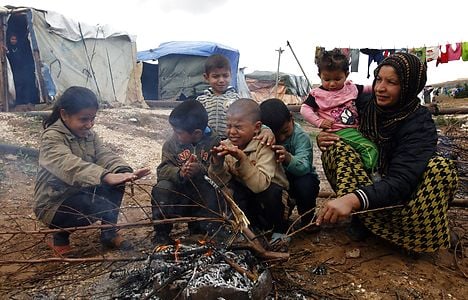 Almost half of all refugees last year came from Syria, like this refugee woman and children at a camp housing Syrian families in the village of Wazzani, near the border between Lebanon and Israel.. Ph
The number of refugees seeking asylum in Denmark nearly doubled in 2014, newly-released figures from the Danish Immigration Service (Udlændingestyrelsen – DIS) show.
A total of 14,815 people sought asylum in 2014. Although the final number ended up significantly below the government’s estimate of 20,000, it is still nearly double the number from 2013, when 7,557 asylum seekers made their way to Denmark.
The 2014 numbers represent a nearly fourfold increase over 2009, when just 3,855 asylum seekers came to the country.
Nearly half of all the asylum seekers in 2014 came from war-torn Syria. The 7,185 Syrians who sought asylum in Denmark were more than three times larger than the next biggest group: 2,293 Eritreans.
The number of refugees seeking and receiving asylum in Denmark was a dominant topic among the nation’s politicians and media throughout much of 2014.
In September, the government announced that it would introduce a new, temporary type of residence permit for asylum seekers fleeing civil wars such as the Syrian conflict after a huge surge in the number of applications. Two weeks later, that was followed by the introduction of new restrictions on the ability of refugees to have their family members join them in Denmark. Those restrictions were criticised by the United Nations Refugee Agency (UNHCR) and a long line of human rights organisations.
Denmark also controversially announced that it would tighten restrictions on Eritrean asylum seekers. After the number of Eritrean refugees spiked over the summer, the justice minister called on DIS to carry out a ‘fact-finding’ mission, the results of which were so heavily criticised that the government ultimately had to admit that it had “doubts” about the report and that Eritreans can expect to be "granted asylum in many cases".
While the government was making it more difficult for refugees to get asylum in Denmark, opposition parties wanted to go even further, suggesting that asylum seekers should receive worse conditions or simply be sent back to where they came from.
All of the asylum talk seemed to have a negative impact on the Danish people. One poll from December showed that 44 percent of Danes are sometimes “ashamed” by the national debate on immigration and foreigners while another showed that 51 percent of Danes think that the debate over asylum seekers has gone too far.
Denmark’s integration minister, Manu Sareen, said the results of the polls should serve as a wake-up call.
“We – especially those of us here in Christiansborg – should sometimes stop and think about how we talk about people. Words create realities and that means that we as politicians have a responsibility,” Sareen told Berlingske at the time.
Of the 14,815 refugees who sought asylum in Denmark last year, 6,110 of them were granted refugee status. That 41 percent approval rate was lower than the 51 percent who were granted asylum in 2013.
Denmark’s costs for housing refugees in 2014 is expected to be 9.2 billion kroner ($1.4 billion), a near doubling of the 4.7 billion kroner asylum costs in 2013.