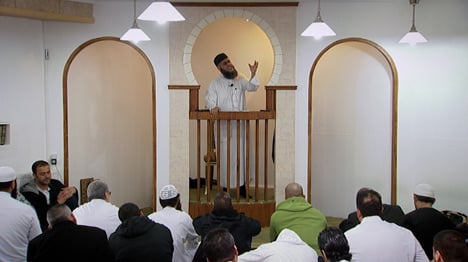 Broadcaster DR released a documentary earlier this month about the deeply controversial Aarhus mosque. Photo: DR1
Aarhus's Grimhøj Mosque was once again thrust back in the spotlight earlier this month after the airing of a documentary in which mosque leaders said that they want to see an Islamic caliphate established, that they don’t believe in democracy and that a Danish convert who carried out a suicide bomb attack in Iraq is a hero.
The DR documentary led to a fresh round of political calls to shut down the mosque.
The week after that, mosque leaders said they were receiving so many threats that they felt the need to contact police for assistance.
Now the mosque is making news again, but this time it is because local authorities are praising its leadership for their role in slowing the stream of Danish Muslims who travel to Syria as foreign fighters.
East Jutland Police have previously said that around two dozen of the at least 110 individuals who have left Denmark to fight in Syria have come from Grimhøj Mosque. But a police spokesman said that only one person from the Aarhus area is thought to have gone to Syria in 2014 and that person had no association with the mosque.
“Grimhøj Mosque deserves a large part of the credit for the development that we can see in 2014. If you would have asked the mosque’s chairman a year ago, he would have said that it is a personal choice if one wants to go to Syria. Today, the mosque warns young people against it. We can see that the young people are listening,” East Jutland Police commissioner Allan Aarslev told Berlingske.
The head of Aarhus Council’s leisure and youth department also credited the mosque for discouraging foreign fighters and said that the calls to shut Grimhøj Mosque are misguided.
“Firstly, it will just confirm among the young [mosque members] that democracy is only for the majority. Secondly, our access to the radicalized environment will be different and it will be more hidden from us [if the mosque closes]. One must remember that the mindset won’t be removed just because you close a mosque,” Toke Agerschou told Berlingske.
The mosque’s chairman, Oussama El-Saadi, welcomed the praise from the police and municipality.
“It’s good that we are becoming known for something besides radicalization. We don’t want the young people encouraging violence or encouraging others to travel [to Syria or Iraq, ed.],” El-Saadi told Berlingske.
Grimhøj Mosque has long been accused of promoting an extremist interpretation of Islam.
Representatives of the mosque travelled the Middle East in 2006 stirring up discontent over Jyllands-Posten’s publication of 12 cartoons depicting the prophet Muhammad. Those cartoons were later republished by French satirical magazine Charlie Hebdo, the target of a recent terror attack in Paris.
In July 2014, a video emerged of Abu Bilal Ismail, an imam at the mosque who is also featured in the documentary, calling on God to “destroy the Zionist Jews”.
Two months later, the mosque made international headlines after declaring its support for the terrorist group Isis, comments El-Saadi doubled down on in the recent documentary.