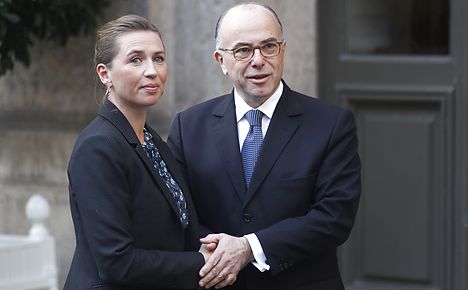 Mette Frederiksen's change of course comes after meeting with her French counterpart Bernard Cazeneuve and other EU ministers in the wake of the Paris terror attacks. Photo: Matthieu Alexandre/Scanpix
Danish citizens who fight alongside the terrorist group Isis should be charged with treason, Justice Minister Mette Frederiksen has said.
“If one travels from Denmark and joins the Islamic State and fights against Danish soldiers, then I think that you have committed treason. I want to ensure that the legality is in order, but that is my clear political signal,” Frederiksen told broadcaster DR.
The justice minister’s announcement marks a departure from the government’s position in October when it was approving the use of Danish F-16s in the military campaign against Isis in Syria.
At that point, Foreign Minister Martin Lidegaard said there were no judicial grounds for charging foreign fighters with treason.
Frederiksen has now asked the ministry’s criminal law committee to determine whether, and how, foreign fighters can be charged with treason. Frederiksen said she expects the committee to give its recommendations before the summer.
Opposition parties cheered Frederiksen’s move.
“It is essential that people who go down there to fight against Danish soldiers and Danish values be held responsible for their actions,” Danish People’s Party spokesman Kristian Thulesen Dahl told DR.
But a leading lawyer with a national legal policy association said that the burden of proof would be almost insurmountable, making the proposed legal manoeuvre an empty gesture.
“One must prove beyond a reasonable doubt that what they [Syria fighters, ed.] are charged with is correct. Otherwise, they need to be acquitted. And I think that’s where the problem lies. There will be a lack of proof. And that’s something that can’t be changed just by making a new regulation,” Bjørn Elmquist, the chairman of Retspolitisk Forening, told DR.
The Danish Security and Intelligence Service (PET) estimates that over 100 people have left Denmark to fight in Syria and that at least 50 of those fighters have since returned.
Frederiksen's change in course comes after she met with European counterparts in Paris following last week's terror attacks. Since those meetings, a number of European countries have discussed new controls. The German government has announced plans to issue 'jihadi ID cards', Spain plans to implement new anti-terrorism measures, Italy is looking at increasing online surveillance and an Austrian right-wing party has called for returning foreign fighters to be "interned".
Sweden's home affairs minister, meanwhile, is calling for increased cooperation and better information sharing between EU countries, telling The Local Sweden that "we must not let the dark forces win".
To limit the overwhelming burden on our moderators, it will not be possible to comment on this article. Feel free to join the conversation on our Facebook page.