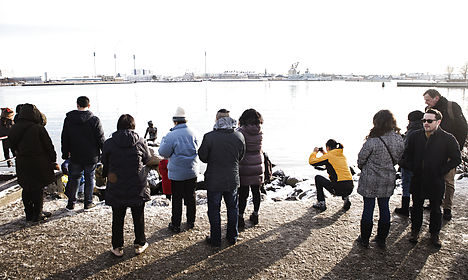 Not everyone who visits Denmark comes to see the Little Mermaid, figures from the national police reveal. Photo: Sophia Juliane Lydolph/Scanpix
In five years, the number of tourists charged with committing crimes in Denmark exploded.
Metroxpress reports that there were 17,725 criminal charges against tourists in 2013, a 49 percent increase over 2008. The newspaper based its report on numbers provided by the Danish National Police (Rigspolitiet).
The nearly 18,000 charges covered everything from immigration violations to rape and robbery.
Henrik Stagetorn, the head of the national association of defence lawyers, said that the largest group of offenders come from Romania.
“I typically see Romanians – who neither live nor work in Denmark but can come here under EU rules – commit pickpocketing, cons and spy on credit card pin codes. There is also a bit of organized burglary,” he told Metroxpress.
The anti-immigration Danish People’s Party said that tougher border controls would cut down on the number of tourists committing crimes in Denmark.
See also: Denmark to strengthen its border controls
“I don’t think it is normal tourists who are out committing crimes. It is people who come to Denmark under the guise of tourism, for example on a visa, for a short period with the intention of committing crimes,” party spokesman Peter Skaarup told Metroxpress.
The ruling Social Democrats dismissed the need to increase border controls and said that the increased number of criminal charges is actually a sign that the government’s efforts have paid off.
“We have increased patrols and surveillance at the border. This increase [in the the number of tourists charged, ed.] is a sign that the government has acted strongly against tourists and others who come to Denmark and commit crimes. The police are simply catching more of them,” party spokeswoman Trine Bramsen told Metroxpress.