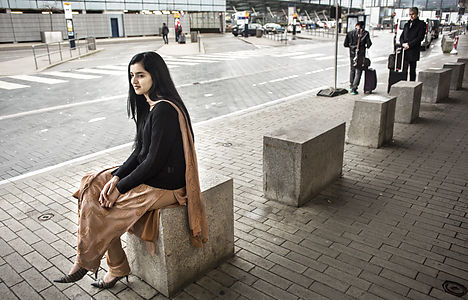 Maria Ahmad, a 23-year-old Danish citizen with Pakistani roots, said she is considering finding a job in Dubai to leave the immigration debate behind. Photo: Niels Ahlmann Olesen/Scanpix
Immigration, and particularly Muslim immigration, is a perennial issue in the public debate in Denmark. From calls to make it harder for people from Muslim countries to enter Denmark to pleas from business leaders to change the way the nation discusses its newcomers, immigration is constantly under discussion.
But for some immigrants, it has become too much. An opinion poll of Danish-Turks residing in Denmark revealed that three quarters of them have considered leaving Denmark altogether to escape the negative debate about immigration.
In the poll, conducted by the magazine Opinionen, three out of four respondents said that they are either ‘strongly’ or ‘somewhat’ considering leaving Denmark for Turkey. And for nearly half of those who are thinking of leaving, the debate on immigration and Islam was cited as a primary reason.
An integration consultant told Berlingske that he was shocked by the poll results.
“It is a problem if the Danish society isn’t better at accepting people who come from other countries like Turkey. It is a bit alarming that the figure is so high. I would have accepted a fairly high number, but not that high,” Hans Lassen said.
Venstre’s Inger Støjberg, whose suggestion over the summer that Denmark should make it harder for people from Muslim countries to enter the country, said the negative tone that surrounds immigration is immigrants’ own fault.
“The problems we see with parallel societies, extremism and the oppression of women are the reasons we discuss Islam and immigrants. I hope that the problems go away. If they disappear, so will the debate,” she told Berlingske.
But Støjberg also added that Danes shouldn’t be expected to bite their tongue when it comes to the topic of immigration.
“Denmark is a country in which we openly discuss religion and immigration and that’s the way it should continue to be as long as there are problems,” she said.
Maria Ahmad, a 23-year-old Danish citizen with Pakistani roots, told Berlingske that she is also considering leaving Denmark even though she was born and raised here, has a job, speaks fluent Danish and feels she holds Danish values.
“The debate on immigrants and Muslims never stops and I don’t think it ever will,” she said.
“Politicians and the media, with all of their talk, leave the impression with some people that immigrants just can’t fit in to Danish society,” she added.
Ahmad said that no matter what she does “it feels like it’s not enough to be acknowledged as a Dane”.
The Opinionen poll spoke to 219 Danish-Turks. People of Turkish origin constitute the largest group of immigrants in Denmark, accounting for 9.8 percent of all immigrants and their descendants according to OECD figures from December.