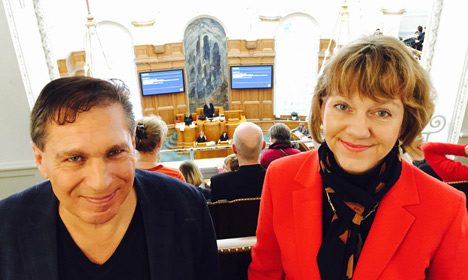 American expat Larry Feinberg and Anne Marie Dalgaard of Danes Worldwide in the Danish parliament just prior to the vote on dual citizenship. Photo: David S. Miller
The Danish parliament passed a law on Thursday that will allow expats living in Denmark to become naturalised Danish citizens while retaining their original citizenship. Similarly, the law will allow Danes living abroad to become naturalised citizens of their country of residence while remaining a Dane. The law goes into effect on September 1st, 2015.
The bill passed 89 for and 19 against, with the nay votes coming from the anti-immigrant Danish People's Party and the right-of-centre Conservatives.
Although dual citizenship through naturalisation was part of the current Social Democrat-led coalition government's political platform, the big break came last year when leading opposition party Venstre changed its longstanding position against dual citizenship and decided to support it.
QUIZ: Can you pass the Danish citizenship test?
Opposition party's support was key
Venstre's citizenship spokesperson Jan E. Jørgensen, told The Local that the change was a gradual and natural one.
"This has been a long process, and it's difficult to single out a particular thing. Society is constantly evolving, globalisation has been increasing step by step, and we have changed our position. Over the past year, I have received many happy messages from Danes living abroad and expats living in Denmark that dual citizenship would now become a reality. It's something that affects a lot of people," he said.
Christian Langballe, the citizenship spokesperson for the Danish People's Party, feels that the law goes against the concepts of loyalty and identity.
"Citizenship is symbolic and representative of loyalty to one's country. You can't share it between two countries. Citizenship is something you have in one place," Langballe told The Local.
Among other things, Langballe is concerned about what would happen to expats living in Denmark who become Danish citizens while retaining their original citizenship.
"What would happen to an Iraqi, of which there are many living in Denmark, who attains dual citizenship and who travels back to Iraq and gets in trouble there? I expect that there would be pressure from Enhedslisten [the Red-Green Alliance, ed.] and Radikale [the Social Liberals, ed.] for the Danish consulate to intervene, even though according to international law, the local country where the person is also a citizen is responsible for handling the situation," he said.
See also: New citizenship test a piece of cake: expats
Retaining national identity while participating locally
The politically independent organisation Danes Worldwide has been representing Danes living abroad since 1919. The organisation's general secretary, Anne Marie Dalgaard, said that the new law is good for its members.
"We have been actively working on this issue for over a decade, speaking to all the political parties in parliament. It's good that people who are away from their country of birth, whether Danes living abroad or expats living in Denmark, will now be better able to retain their identity while actively participating in their adopted culture," she told The Local.
Larry Feinberg from Brooklyn, New York is an expat who has been living in Denmark since the mid-1980s. Over the past eight years, he has organised meetings and lobbied the Danish parliament for the right of immigrants to retain their original citizenship when becoming a naturalised Dane, talking to any Danish politician who would listen.
"It's not only important for me, but for any expat living here. We pay taxes but we don't have the right to vote in parliamentary elections. We don't want to give up something that's part of ourselves, which is the citizenship we're born with," Feinberg said.
A long time coming
Until now, Denmark has been one of the last EU countries that doesn't normally allow dual citizenship through naturalisation. Yet according to the Justice Ministry, which administers laws concerning citizenship, up to 40 percent of people seeking to become naturalised Danish citizens get to keep their original citizenship, for instance if they are refugees and cannot go to their embassy to renounce their citizenship, or if they come from a country that doesn't allow its citizens to renounce their citizenship.
For several decades, Denmark has also allowed dual citizenship for children where one parent is Danish and the other non-Danish.
With the new law, Danes who gave up their Danish citizenship within the past five years will be able to reinstate it. Expats who have applied for Danish citizenship within the past two years yet have not yet renounced their original citizenship will be able to retain the citizenship. For Danes living abroad and expats living in Denmark, there is a nonrefundable one-time application fee of 1,200 kroner (about $200).
For expats living in Denmark, they will have to meet the existing requirements for attaining Danish citizenship, such as having a permanent residence permit and passing a Danish citizenship test. Information about applying for Danish citizenship can be found on the Justice Ministry web page in Danish.
According to expat Feinberg, "it's a great day for expats and it's a great day for Denmark. I'm glad its over."