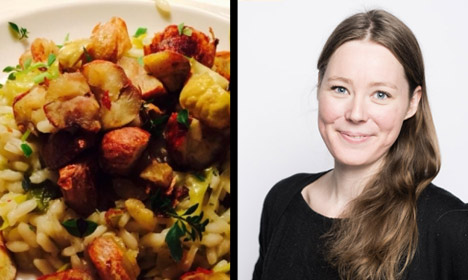 Inger Gislesen's Cook with a Local brings people together over vegetarian risotto, beer brewing and much more as a way to connect the world through food and drink. Photos: Cook with a Local, Jakob Kjø
Founded in Copenhagen, Cook With A Local allows members to either host or attend private food or beverage classes. It can be the preparation of a traditional dinner dish, wine tasting, cake decorating, juicing, lectures on slow food, whiskey tasting, beer brewing, candy making and much more. As co-founder Inger Gislesen tells us, Cook With A Local wants users to travel the world and bring home a new recipe as souvenir.
How did you come up with this business idea?
In 2013, while doing a cross-disciplinary research project in Copenhagen's Blågården neighbourhood, in partnership with Wonderful Copenhagen, Socialsquare and Det Gode Naboskab, we found that the area was rich with food initiatives but that the locals and tourists were not interacting with each other even though both groups expressed a desire to do so.
We started to interview people about food, which led to a spontaneous cooking lesson in the back of a small grocery store. The Arabic owner taught us how to make one of his secret recipes while we all discussed serious life matters and shared our hopes and dreams. It was an experience so memorable that we wanted others to have the same kind of encounters and that's why we set out to make this idea a reality. We aim to connect people all over the world through food and beverage lessons, and to provide tourists with unique experiences while give locals a chance to earn some money.
Are you an entrepreneur in Denmark? We'd like to share you story.
How has your initial journey been so far?
It has been amazing but also very challenging. We have experienced many setbacks along the way and had a big change in the founding team. Everything took a lot longer than we anticipated.
In April, the current founding team was complete and in May, we won a stand at one of Europe's largest tech and media conferences, Infoshare, in Poland.In June, we were finalists at the Venture Cup and won a booster pack, giving us a nice cash injection.
Both events opened a lot of doors for us and in September we were ready to start testing the alpha version of our website and launched in December.
How has the process changed you as a person?
Becoming an entrepreneur changed me as a person because it becomes a lifestyle. When you are so passionate about something, it takes a large place in your life. I found something I love and made it into a company. I feel very fortunate to have the opportunity to do that. I feel like I have gotten a second education as one needs to learn everything themselves when you start up. It has been an amazing learning experience. I am lucky to have a really great team so we can support each other.
What challenges are you facing post-launch? How are you trying to face them?
Our main challenge is to get enough people to offer, and sign up for, classes. We are quite dependent on word of mouth and the network we have built up over the last year. We are trying to recruit new customers in all the ways we can think of, from utilising social media, to press releases and calling people. It is, of course, very different going from closed testing to actually launching, and now the work really begins for us. We hope and think we can make it work as we have gotten a lot of positive feedback on our idea globally.
Any other personal reflections and/ or message to other early startups?
Spend time finding the right team. It sounds like a cliché but it is true. Having a good team that works well together, as well as independently, makes a world of difference. Don't give up when you face the first setbacks. Life as an entrepreneur is hard and there will be many setbacks along the way, with people who don't believe you can make it, or that your idea is not sustainable. The hard part is to take what is useful from their feedback and try to become even better.
Our concept evolved a lot from what we initially started with. I would also advise everyone to ask for help and to help others. The advice we have gotten from others, and most recently our mentor, has meant a lot to us and helped us grow faster and better.
Being an entrepreneur is tough but when start-ups help each other, it becomes easier for everyone. I think it is important to share knowledge, advice and encourage each other to grow.