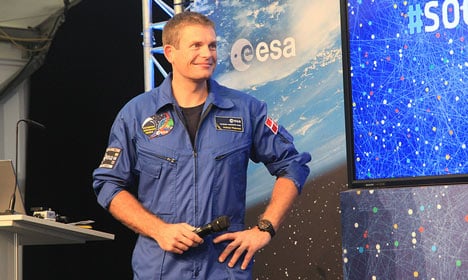 Andreas Mogensen will be the first Dane in space when he leaves for the ISS in September. Photo: Brigitte Bailleul/Flickr
Fresh off the European Space Agency’s historic comet landing last month, Denmark has agreed to up its contributions to European space exploration.
At this week’s European Space Agency (ESA) ministerial council meeting, 20 member countries agreed to invest op to 44 billion kroner ($7.3 billion) in ESA activities over the next three years. Denmark’s contributions will total 313 million kroner.
The largest share of the Danish funding will go toward supporting the International Space Station (ISS), which next year will be visited by Denmark’s first ever astronaut, Andreas Mogensen.
Mogensen will be a member of crew travelling to the ISS in September 2015. His 10-day mission will include testing the ESA’s new Skinsuit, which is designed to minimizer the negative effects of weightlessness on the body. He will also launch two small satellites created by Aalborg University that will monitor ship traffic in the Arctic.
“Within the next two years, we will have both an astronaut and a climate gauge sent up to the ISS. With Denmark’s contributions, we are sending a clear signal about our participation,” Sofie Carsten Nielsen, the minister for higher education and research, said.
Nielsen said that the ESA’s sensational mission with the robot probe Philae, which successfully landed on Comet 67P/Churyumov-Gerasimenko on November 12, helped to demonstrate the importance of space exploration.
“It’s important for me that we see an increased focus on how important the space industry is to our modern infrastructure and daily life. So it is spectacular that the ESA can land on a comment millions of kilometres out in space. Then space travel seems no further away than our daily needs for reliable weather forecasts and safe navigation,” Nielsen said.