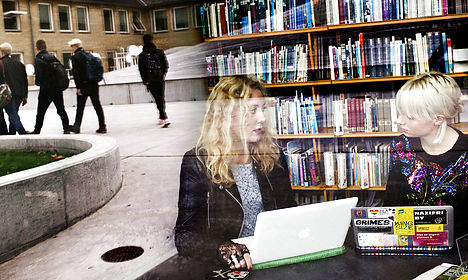 A reform of the lower grades began this year and now the government plans to change school for older students as well. Photo: Linda Kastrup/Scanpix
Having already pushed through a comprehensive reform of Denmark’s public schools at a primary and secondary level, the government has now announced a set of reforms aimed at upper secondary students.
Among the proposed reforms are tougher entry requirements, more hours in the classroom and a more than halving of the available fields of study.
Students wishing to enter upper secondary school (gymnasium in Danish) will need to score a mark of at least a 02* in both Danish and mathematics. To help them get there, the reform will include more hours in maths and more daily contact with teachers as well as an annual evaluation to help students focus on how to perform better in school.
Students entering upper secondary school will also have significantly fewer choices when it comes to their line of study. The reform will cut the options from today’s more than 200 available fields down to 90.
“We will make it easier for students to choose the right fields so they are prepared to pursue the educations at a higher level. At the same time, we are raising the education level, particularly in maths and science so that students get the right competencies,” Education Minister Christine Antorini said.
At a Monday press conference announcing the reforms, PM Helle Thorning-Schmidt said the changes would pay off for Denmark.
“Our children and youth shall be the best educated generation in Danish history,” she said.
The government will now negotiate the proposed reform package with the opposition parties. Primary opposition party Venstre has said that it wants a national language strategy, including more hours in both Danish and foreign languages, included in the reform.
* The Danish grading system uses a seven point scale that was introduced in 2007:
12 = excellent (ECTS equivalent = A)
10 = very good (ECTS equivalent = B)
7 = good (ECTS equivalent = C)
4 = fair (ECTS equivalent = D)
2 = adequate (ECTS equivalent = E)
0 = inadequate (ECTS equivalent = Fx)
-3 = unacceptable (ECTS equivalent = F)