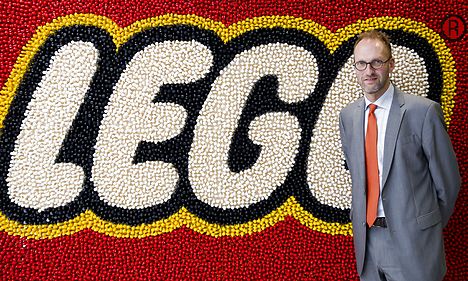 Generations of children worldwide have grown up loving Lego and the popularity of tablets and video games will not change that, Lego CEO Jørgen Vig Knudstorp said. Photo: Justin Tallis/AFP/Scanpix
Generations of children worldwide have grown up loving Lego and the popularity of tablets and video games will not change that, the company's chief executive told AFP in an interview.
Jørgen Vig Knudstorp said he believed that the plastic, multi-coloured bricks – whose name is an abbreviation of the Danish words "leg godt", meaning "play well" – would be around for "centuries".
The company hit trouble a decade ago but is now the world's biggest maker of toys by sales, more than quadrupling its revenues in 10 years.
See also: Lego now the world's largest toy company
Far from threatening Lego's popularity, Knudstorp said the digital era offered great opportunities for the company to build its customer base even further.
"We are one of the most popular video games, we also have reached more and more customers on social media – Lego fans are gathering like never before," he said.
"In the past, children watched TV and then played with Lego. Now they play on tablets and play with Lego. The reason why they do it is that many children, and adults as well, want a real, physical experience. Even though we like to watch football or play it on a PlayStation, it's still not the same as running on the field kicking the ball," Knudstorp said.
He was speaking as Lego, whose headquarters are in Billund, opened a fifth "main office" in London on Friday as the company seeks global growth.
One key target is Asia. As well as offices in Shanghai and Singapore, the company started building a new factory in China's Jianxing, south of Shanghai, earlier this year to build Lego products for sale in Asia.
See also: Lego lays the blocks for Asian dominance
'Please don't die'
Such an international presence is a far cry from the company's origins.
The company was founded in 1932 by Ole Kirk Kristiansen, the grandfather of the current owner, in a small workshop in Billund, and took the name Lego two years later. It started out making products like wooden ducks, while the iconic plastic brick in its present form dates back to 1958.
Lego became a major international brand from the 1960s and Legoland in Billund, now one of Denmark's biggest tourist attractions, was opened in 1968.
See also: VIDEO: A story of love and Legoland
But the group hit trouble in 2004, announcing major losses. Knudstrop was appointed that year and recalls receiving "letters from customers saying 'please don't die'."
He said that, at that stage, the company had "spread ourselves over too many areas" and was poorly run.
To turn the business around, he focused on cutting manufacturing costs, releasing the right products in tighter timeframes and "reigniting the product innovation, really working with children to make products they find more appealing".
Now the focus is on international expansion, hence the opening of the London office.
The opening coincides with the Brick 2014 fan event being held at London's giant ExCeL exhibition centre from Thursday to Sunday, featuring Lego sets, characters and construction zones.
For Knudstrop, despite the changes which he has brought and those in the digital world, the Lego brick is at the centre of what the company is about – and will remain so for years to come.
"I think the brick will stay with us for centuries because it is fundamental like football or reading a great book, telling stories," he said. "It's something that will be around forever."