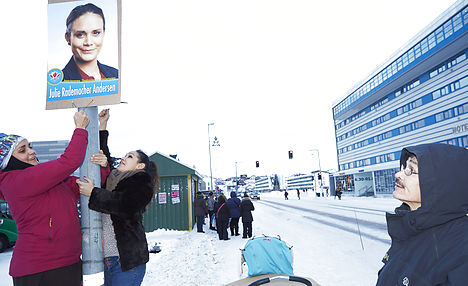 Greenlanders are more concerned about immediate issues than the island's long-term relationship with Denmark. Photo: Ulrik Bang/BANG/Scanpix
Greenland voters began casting their ballots Friday in an early election dominated by harsh economic reality as the world's largest island struggles to capitalise on its huge natural riches.
Triggered by an expenses scandal, the vote comes just 20 months after the previous elections to fill Greenland's 31-member parliament, when full independence from former colonial master Denmark was the top campaign issue.
"While the emancipation from Denmark was a burning hot topic in last year's election, in the run-up to today's vote it has been as been as ice cold as a November morning in Ilulissat [a town north of the Arctic circle]," Danish news agency Ritzau wrote in a story published by Greenland's Sermitsiaq newspaper.
See also: Greenland independence on back burner in snap election
With a gross domestic product that shrank 1.9 percent to 13.6 billion kroner in 2013, the economy has become an urgent issue for Greenland's 57,000 inhabitants — of whom about 40,000 are eligible to vote.
More importantly, it has become clear that Greenland's undisputed mineral wealth — eyed by resource-hungry giants like China — will take longer to develop than initially thought. Britain's London Mining was awarded the territory's first major exploitation licence last year but the iron-ore project's future is uncertain after the company went into administration.
Interest in oil exploration in the seas surrounding Greenland has faded as the price of oil has fallen amid rising shale gas production in the US and a sluggish world economy.
As a result, the election campaign has focused on diversifying the economy and how to boost fishing revenues, which accounts for 90 percent of exports, and a nascent tourism industry.
"The status of Greenland's economy is very bleak, and going forward there is no indication that it will get better," the chairman of Greenland's Economic Council, Torben Andersen, told Ritzau.
Prime Minister Aleqa Hammond's social democratic-led government swept into power on a platform of speedy secession funded by exploitation of the island's mineral resources, which are expected to become more accessible due to climate change. But the 49-year-old politician — Greenland's first ever female leader — saw her tenure cut short by the expenses scandal, and fresh elections were called in October after several government ministers resigned.
See also: Greenland calls election amid expenses scandal
Greenland, which geographically forms part of North America rather than Europe, is largely self-governed but it remains dependent on an annual subsidy from Denmark, which still controls foreign affairs and defence policy.
Environmental campaigners accused Hammond of short-circuiting the democratic process by rushing through legislation that lifted a ban on uranium mining, which the main opposition party, the leftist Inuit Ataqatigiit (IA), wants to hold a referendum on.
IA has held a narrow lead in the latest opinion polls and is expected to benefit from last-minute revelations that the government's finances were deeper in the red than previously thought.
Voting began at 11am Danish time on Friday, and voting stations will close at 10pm Danish time.