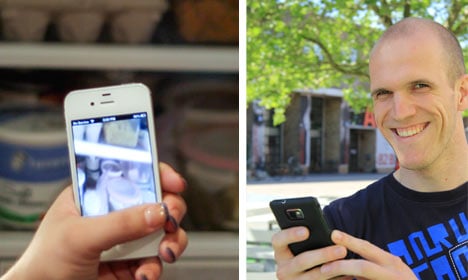 Thelle Kristensen's app allows volunteers to lend their eyes to the blind over a smartphone. Photos: Be My Eyes
The app Be My Eyes is almost self-explanatory: it allows online volunteers to lend their eyes to the blind via the users’ smartphones.  The app connects the visually-challenged with those who would like to help them. After both parties have installed the app and registered, the blind user can use it to call up a nearby volunteer and talk through a live video stream between the connected devices. This way, the volunteers become the visually-challenged person's eyes over the smartphone.
The Local caught up with the app's co-founder Thelle Kristensen, an IT-eBusiness student at the IT University of Copenhagen who plans to launch Be My Eyes in more markets soon.
How did you come up with this business idea?
I happened to meet my business partner, Hans Jørgen Wiberg, at a startup event in Aarhus. He is a consultant for the Danish Association of the Blind. He pitched the idea to me and after some online meetings, I decided it was worth pursuing.
Initially, there were eight people in the team and they are all still on board as advisors to guide Hans and me. We started a beta version in 2012.
Fully blind as well as visually-impaired people have to depend upon normal people for smaller things that we take for granted. Through this app, the users can locate the nearest available helper from a network of 350 helpers and 115 blind people in Denmark. If a helper is unavailable at the moment, the app routes the user to the next one. After the formal launch in October, we have had 474 calls made for help so far.
What were the initial challenges? How did you overcome them?
Funding was a big challenge. We had won an award for the most innovative idea at a startup event but it wasn't a big amount. The first major chunk of funding came in September 2013. Prior to that, I had self-doubts whether this initiative would work. Also, getting the right team and back-end product development done was a challenge. We were networking to find developers and graphic designers to develop prototypes. Only our belief in the mission to help the visually-challenged people made us continue on our journey. Also, we shared everything about our initiative, which made it easier to get the much-needed cash flow.
See also: Entrepreneurs with both soul and sole
How has the journey been so far?
We have seen ups and downs. Getting the funding and features like localization, time zones, etc into the app were the two most important achievements. We opened up to potential investors and shared the prototypes, codes, etc. with them. That's how we managed to win their trust and investment. We plan to expand in English-speaking countries.
How has becoming an entrepreneur changed you personally?
We often hear that Danes don't go out of their way to help others. This, however, is changing. As I came in close contact with blind people, I realised how big a handicap this is. It strengthened my resolve to make a difference in their lives. Eighty percent don't find employment. Things that may appear trivial to us are not at all trivial for a blind person. That's where Be My Eyes comes in to help and really make a difference.
Any other personal reflections and/or message to budding entrepreneurs?
It is possible to make a living through social entrepreneurship. You also get the satisfaction of changing or bettering lives. More budding entrepreneurs should consider taking up the not-for-profit route to business.
Are you an entrepreneur in Denmark? Contact us and we might feature you story.