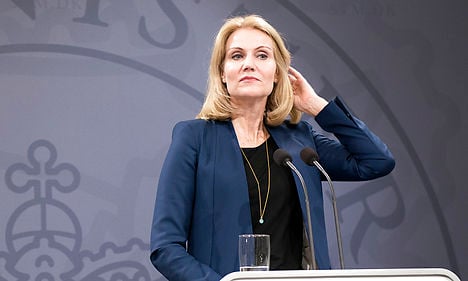 PM Helle Thorning-Schmidt said Denmark would "keep our heads calm and the cockpit warm". Photo: Claus Bech/Scanpix
Despite Russian aircraft having made several encroachments into Danish and Nato airspace, including a simulated attack on the island of Bornholm, Danish leaders say they refuse to cower before Moscow.
Prime Minister Helle Thorning-Schmidt told the Financial Times that Denmark is not overly concerned about Russian aggression.
“In terms of our territory, we are not worried. We keep our heads calm and the cockpit warm,” she said.
See also: Russia simulated an attack on Denmark
Defence Minister Nicolai Wammen also said Denmark would not hesitate to stand up to Russia.
“We have Danish F16 fighter jets ready to scramble 24/7. They will be on their wings if needed,” Wammen told the Financial Times.
“The Russians know we will do what is necessary,” he added.
Last month, the Danish Defence Intelligence Service (Forsvarets Efterretningstjeneste – DDIS) released a national risk assessment that focused heavily on Russia. The report predicts “a new frozen European conflict” and says that the “Ukraine crisis will continue to strain relations between Russia and the West.”
The DDIS reported detailed an incident in June in which Russian military jets equipped with live missiles flew at a low altitude toward Bornholm before breaking off the route and turning back around.
The military exercise took place while around 90,000 guests visited the island for Folkemødet, a political festival that gathers politicians, journalists, activists and over 600 different organisations for four days of events.
Denmark, Sweden, Norway and Germany have all seen Russian military jets approach or encroach their air space in recent months.