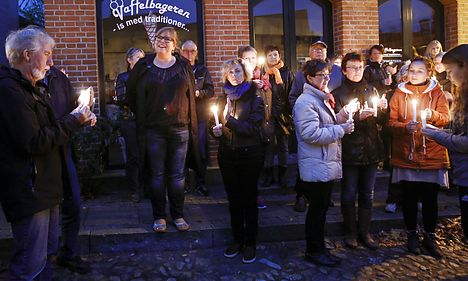 Although many Mariager residents have voiced support for the couple, including this demo on Sunday, they have decided to leave the small town. Photo: Lars Rasborg/Scanpix
Copenhagen was recently declared the most gay-friendly city in the world, but in the provinces it can be a different story.
A lesbian couple who moved from Aalborg to the small town of Mariager in northern Denmark were so harassed for the sexual orientation that they have decided to move.
Tulle Krøyer and her wife began facing harassment some four months ago in the form of letters saying things like “You live in sin – yuk!”, but things began escalating. A disparaging note was set in the couple’s daughter’s daycare closet. Rubbish was thrown into the family’s yard. Dog excrement was hurled at their windows. Ultimately, it became too much for the couple and they have decided to leave Mariager, a fjord town of just over 2,500 residents.
“It has been extremely stressful and something you can’t even imagine happens in today’s Denmark,” Krøyer told TV2 Nord.
“We just want to live our lives in peace,” she added.
North Jutland Police said on Friday that a 39-year-old man has been arrested and charged for three counts of vandalism against the couple, but for a pair of activists in more gay-friendly Copenhagen, the arrest does not put an end to the story.
Thomas Nymann and April Chris are planning to bus supporters into Mariager to hold a parade in support of the harassed couple.
“We need to show that it is unacceptable when something like this happens. The parade is a an expression of support for the lesbian couple in Mariager and for the right to live your life who you want regardless of where in the country you live,” Nymann told Politiken.
The parade is being supported by LGBT Danmark, which said that the Mariager couple’s experience is not unique.
“We experience that cases like these most often occur in the provinces because there is a poorer representation of minorities. It’s easy to be singled out when you are the only openly gay couple in a small town,” LGBT Danmark spokesman Ask Ulrich Petersen told Politiken.