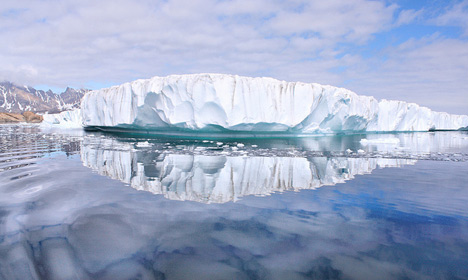 "Severe, widespread and irreversible impacts" if temperatures rise by 4C as current trajectory predicts. Photo: Christine Zenino/Flickr
Time is running out to limit global warming to two degrees Celsius (3.6 degrees Fahrenheit), the United Nations' climate experts said in Copenhagen on Sunday, warning that current trends in carbon emissions will lead to disaster.
In the crowning summary of a landmark review, the Intergovernmental Panel on Climate Change (IPCC) said emissions of three key greenhouse gases were at their highest in more than 800,000 years.
SEE THE MAIN POINTS OF THE REPORT HERE
Earth is now on a trajectory for at least 4C warming by 2100 over pre-industrial times — a recipe for worsening drought, flood, rising seas and species extinctions.
"The scientific case for prioritising action on climate change is clearer than ever," IPCC chief Rajendra Pachauri said.
"We have little time before the window of opportunity to stay within 2C of warming closes.  To keep a good chance of staying below 2C, and at manageable costs, our emissions should drop by 40 to 70 percent globally between 2010 and 2050, falling to zero or below by 2100.”
The report — the first overview by the Nobel-winning organisation since 2007 — comes ahead of talks in Lima next month to pave the way to a 2015 global pact in Paris to limit warming to 2C.
But the negotiations have been hung up for years over which countries should shoulder the cost for reducing carbon emissions, which derive mainly from oil, gas and coal — the backbone of the world's energy supply today.
The report said switching to cleaner sources, reducing energy efficiency and carrying out other emission-mitigating measures would be far cheaper than the cost of climate damage.
The bill today for doing this is affordable, but delay would cause it to rise substantially for future generations.
"Mitigation cost estimates vary, but…  global economic growth would not be strongly affected," the IPCC said, estimating that "ambitious" carbon curbs would shaving 0.06 percentage points annually from global consumption this century, which is targeted to grow by 1.6-3.0 percent annually.
"Compared to the imminent risk of irreversible climate change impacts, the risks of mitigation are manageable" said Youba Sokona, one of the lead authors of the new report.
The document painted a bleak tableau of a 4C world, marked by hunger, homelessness, species loss and violent conflict over scarce resources.
There would be a "very high risk of severe, widespread and irreversible impacts globally," it said.
The report is only the fifth in the IPCC's 26-year history. It was set up in 1988 to provide governments with neutral and objective advice about global warming, its impacts and the options for tackling it.
Sunday's synthesis report encapsulated three previous volumes published over the last 13 months. They were written by more than 800 experts, whose work then went through arduous review and commentary by outside specialists.