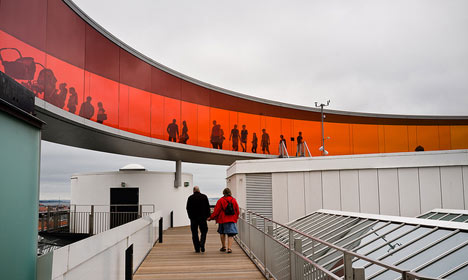 The Rainbow Panorama at the ARoS Aarhus Kunstmuseum. Photo: Poul-Werner Dam/Flickr
Aarhus has tried mightily to brand itself internationally over the past several years. It’s most discussed effort was the decision to officially change the spelling of the city’s name from Århus to the most search-friendly Aarhus, effective on January 1st, 2011.
Later that same year, the newly-renamed city rolled out the slogan ‘Aarhus – Danish for progress’. The branding strategy created a fair share of head shaking when it was introduced in September 2011 and now city officials have conceded that it was a bust.
“It’s not used and it doesn’t work. Therefore it’s being scrapped,” Aarhus Mayor Jacob Bundsgaard told Jyllands-Posten.
The city won’t completely abandon it’s English branding however, as it plans to continue to use its ‘with Aarhus’ tagline.
“You should be able to embrace the international branding strategy. That’s not the case with ‘Aarhus – Danish for progress’, so we’re adjusting the strategy,” Bundsgaard said. The city will still use its 'with Aarhus' slogan
Despite spending one million kroner ($170,000) on the ‘Aarhus – Danish for progress’ strategy, a poll revealed that just 48 percent of the city’s business community had even heard of the three-year-old slogan.
For years, Aarhus was known as ‘Smilets By’ (the City of Smiles), and Bundsgaard said that the city should re-embrace it after its failed English-language attempt.
“I’m not saying that ‘Smilets By’ should be our new slogan, or that we should make a new smiley logo, but the city shouldn’t be ashamed of it as a nickname and should recognise it to a greater extent,” he told Jyllands-Posten.