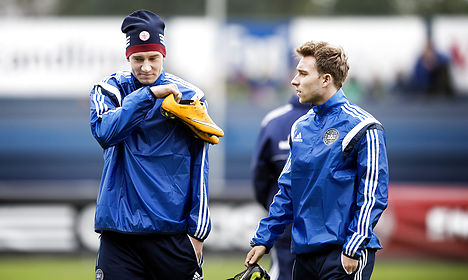 Danish striker Nicklas Bendtner, 26, is seemingly getting his career back on track with German top-flight side VfL Wolfsburg in the Bundesliga, and on Tuesday he fired home a spectacular volley during training for Denmark's upcoming Euro 2016 qualifiers.

The clip is from the national team's training session in northern Zealand, where manager Morten Olsen's club is preparing for their upcoming Euro 2016 qualifiers against the surprise Albania in Tirana on Saturday, and then a visit from Portugal and superstar Cristiano Ronaldo to Copenhagen's Telia Parken on October 14th.