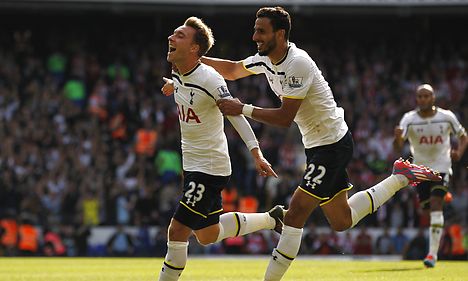 Christian Eriksen (L) celebrates his match winning goal for Tottenham against Southampton in the English Premier League in north London on October 5th. Photo: Ian Kington/Scanpix
One of the brightest stars on the Danish football stage, the 22-year-old Tottenham Hotspurs star Christian Eriksen, wants to take his club to the Champions League, he told the football site Tipsbladet, adding that he enjoys life in London with his current squad.
"I haven't thought about moving to another club at all. I hope we can build on what we already have. It's a good team and it is a fantastic club to be at. It would be even more fun if we can become a part of the top flight [in the Premier League, ed.] That is a realistic aim," Eriksen said.
See also: VIDEO: Top 10 Danish football talents
"When you've tried it once, everyone wants to play in the Champions League. That's where it's at. That is where the most fun games are. And then again now that we are in the Europa League we have to do our very best there as well," he added, referencing the newly instated rule that will see the winners of the Europa League automatically qualify for the next season's Champions League.
Eriksen played in the Champions League several times during his years with Ajax Amsterdam and will also play a vital part in Denmark's upcoming Euro 2016 qualifiers against Albania and Portugal this coming week.