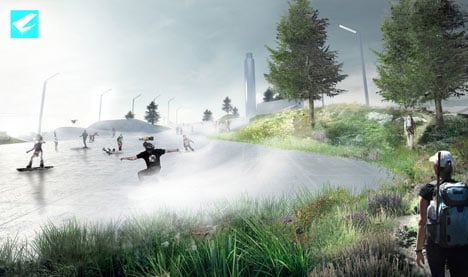 An artificial ski slope and nature area will top the waste facility. Illustration: BIG
The public financing has been secured for one of star architect Bjarke Ingels’s most ambitious projects: a waste-to-energy plant topped by an artificial ski slope near downtown Copenhagen.
Ingels’s firm BIG has been planning the Amager Resource Center since 2010 and work has been underway since last summer, but a key piece of the financing puzzle did not fall into place until last week’s decision by Dragør Council to commit 800,000 kroner to the project.
With that decision, five nearby councils are on board to finance the majority of the project, led by the City of Copenhagen’s 30.8 million kroner contribution.
The leader of the ski slope project, Patrik Gustavsson, welcomed the news.
“This is totally fantastic! This means everything for the rest of the process. It is completely essential and it is what we have been working on for the past year,” Gustavsson told Politiken.
The Amager Resource Center converts the existing waste-to-energy plant Amagerforbrændingen into an elaborate facility that will be topped by an 31,000 sqm park including an artificial year-round ski slope, climbing walls and nature areas. The waste plant will send giant smoke rings into the air for every quarter tonne of CO2 produced. Illustration: BIG
The facility will also send a giant smoke ring into the air for each quarter tonne of CO2 produced by the burning of waste “as a gentle reminder of the impact of consumption,” according to BIG. The facility will release around one million such rings into the atmosphere every year.
With the financial contributions of Copenhagen, Frederiksberg, Hvidore, Tårnby and Dragør councils totaling 42.2 million kroner, the requirement that the project’s public funding equal 60 percent of its total cost has now been met. The private fund Fonden R 98 has kicked in 10 million kroner and Amager Resource Center must now raise the remaining 18.2 million kroner needed to make the plan a reality.
Gustavsson told Politiken that he hopes to have the remaining money secured before the end of the year.
Copenhageners should first be able to ski down the Amager Resource Center in 2017.