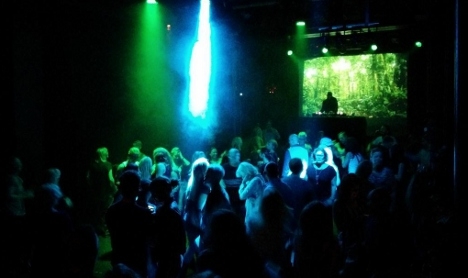 Around 900 people turned up for the Sober event in Stockholm. Photo: Södra Theatre
Around 900 people packed into Stockholm's Södra Theatre last Friday night for the newest club concept to hit the trendy city. But this night was defined not be what it offered clobbers, but what it didn’t. Namely: alcohol.
The club night event Sober was the first of its kind in Stockholm and tickets for the booze-free party sold out weeks in advance.

At the Sober event in Stockholm, partygoers had to prove that they hadn't been drinking

Following its debut success, Sober’s mastermind Mårten Andersson plans to make it a monthly event in Stockholm and is eyeing the possibility of bringing the alcohol-free concept to the Danish capital.

"I am considering opening up Sober nights in more cities in Sweden and possibly other countries. The Nordic counties would be my first priority, so Copenhagen is a clear option,” Andersson told The Local.
But what’s it like to go clubbing stone cold sober? The Local Sweden’s Maddy Savage was at the Stockholm debut and has a full report here.