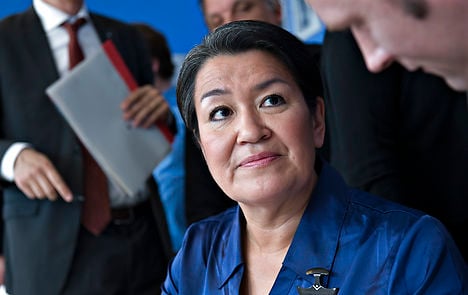 Aleqa Hammond's spending scandal has effectively sunk her government. Photo: Jens Nørgaard Larsen/Scanpix
Greenland's government has called an election for November 28 after an expenses scandal prompted Prime Minister Aleqa Hammond to step down as leader of her party.
Acting Prime Minister Kim Kielsen made the announcement at a press conference on Wednesday evening shortly after Hammond resigned as leader of the Siumut party.
Hammond's resignation came after a government coalition partner withdrew and two ministers from her own party quit over her alleged  misuse of 106,363 kroner (14,300 euros, $18,000) of public funds.
"We cannot achieve a majority in Inatsisartut (parliament) and there must be if there is to be a government," Kielsen said in a statement.
On Tuesday Hammond was granted temporary leave from her ministerial duties by lawmakers while she is being investigated, but only after narrowly escaping a vote of no confidence.
See also: Greenland PM asks for leave amid investigation
One of the ministers who stepped down was the industry and mineral resources minister, Jens-Erik Kirkegaard, who oversaw the nascent mining industry that Greenland — which is dependent on Denmark for its foreign policy and defence — hopes will one day enable it to become fully independent.
Hammond "should take the natural consequences of her actions and step down," Kirkegaard wrote in a joint statement with the education and culture minister, Nick Nielsen, on the Greenland home rule government's website.
Both are from Hammond's social democratic Siumut party.
The liberal Atassut party, without which the government lacks a parliamentary majority, said it would also leave the coalition and called for fresh elections.
Earlier in the day, the party's health and infrastructure minister, Steen Lynge, announced his resignation.
"My desire to withdraw from Naalakkersuisut (government) has been based on my personal values," he wrote in a statement.
A report from the Nuuk parliament's audit committee on Friday said the prime minister had used government money to pay for airline tickets for herself and hotel costs for her family. After receiving several reminders since April last year, Hammond repaid the full amount last month.
Greenland is largely self-governed, but still remains in the shadow of its former colonial power Denmark. The vast Arctic territory has a population of just 57,000.
Siumut won the March 2013 election after pledging to change the royalties system for foreign mining companies wanting to extract rare earth and other raw materials from the potentially rich Greenland underground.
Denmark currently provides 3.2 billion kroner a year in subsidies to Greenland under an autonomy agreement that gives the country full control of its natural resources.