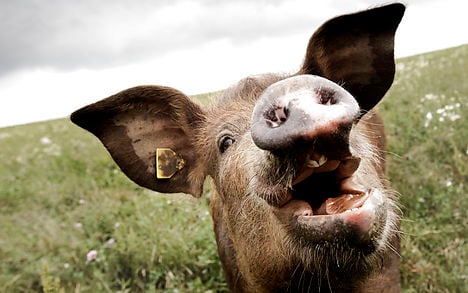 Denmark's agriculture industry and Danes' high meat consumption are behind the "absolutely poor" placing. Photo: Mads Nissen/Scanpix
Researchers at the World Wildlife Fund (WWF) measured how countries around the world consume fossil fuels and looked at other relevant factors including forestry, fishing and farming methods.
Denmark came out fourth on the annual Living Planet Report list, behind only behind oil-producing states Kuwait, Qatar and the United Arab Emirates. Neighbouring Sweden came in tenth place.
The report suggests that if everyone in the world lived like a Dane, the global population would need the resources from about 4.5 Earth-like planets.
Gitte Seeberg, a spokeswoman for the Danish WWF, called the fourth place finish "absolutely poor".
"It is the way we live and the way we have arranged our society that gives the big ecological footprint. Our country consists of roadways, cities and crop fields with hardly any nature. On top of that, we consume way too much meat, among other things," Seeberg told Politiken.
See also: Denmark: Greenwashing leader of the world
Despite Denmark’s high placement on the list, the Living Planet Report also praised the country for being “a world leader in harnessing and providing wind power”.
“We have a lot to be proud of here in Denmark. We are still a leader in wind power and our efforts in that area mean that we make an increasingly larger difference in the world’s climate and environment while at the same time creating growth and jobs here at home,” WWF Danmark’s John Nordbo said in a statement.
Earlier this month, it was announced that wind power accounted for a record 41.2 percent of all electricity used in Denmark during the first half of 2014.
Report sounds the alarm on wildlife populations
Launched at the United Nations in Geneva, the Living Planet Report ranked 152 nations' ecological footprints and warned the world was living beyond its means.
WWF argues that to reverse the trend, politicians in Denmark and globally would need to limit forestry and fossil fuel emissions and consumers would need to dramatically change their habits.
"This damage is not inevitable but a consequence of the way we choose to live," Ken Norris, Director of Science at the Zoological Society of London which works with the WWF, said in a statement.
The report also found that world populations of fish, birds, mammals, amphibians and reptiles fell overall by 52 percent between 1970 and 2010, far faster than previously thought.
"These are the living forms that constitute the fabric of the ecosystems which sustain life on Earth – and the barometer of what we are doing to our own planet, our only home. We ignore their decline at our peril," said WWF International Director General Marco Lambertini.
"It is essential that we seize the opportunity – while we still can – to develop sustainably and create a future where people can live and prosper in harmony with nature," he added.