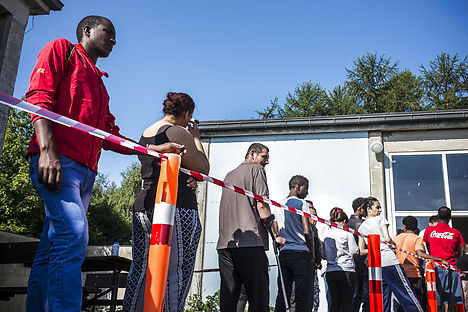 Refugees at the Red Cross centre in the Zealand town of Auderød wait in line to receive toiletries. Photo: Søren Bidstrup/Scanpix
Denmark said on Friday it would introduce a new, temporary type of residence permit for asylum seekers fleeing civil wars such as the Syrian conflict after a huge surge in the number of
applications.
The new asylum solution came on the same day the government unveiled a new plan for stemming the flow of Danish extremist fighters to Syria and Iraq.
See also: Denmark presents new anti-jihadist strategy
"The majority of the refugees we see at the moment are not individually persecuted in their home country," Justice Minister Karen Haekkerup said in a statement.
Many of those applying came from "areas in Syria where there are indiscriminate attacks on civilians".
"We therefore need to look at how we can ensure these people can be sent home as soon as conditions improve in the home country," she said.
The new residence permits would be valid for a year, after which they could be extended for another two years.
The number of refugees seeking asylum in Denmark more than quadrupled from the beginning of the year to about 2,300 in August, bringing the total number in the year to date to 7,900, which is more than in all of 2013.
See also: Highest refugee influx in 20 years
However, they make up a miniscule proportion of the total number of refugees from the Syrian conflict, which surpassed three million in August, according to the UN.
Denmark's measures would have "dramatic consequences" for those fleeing the Islamic State's violence, said Johanne Schmidt-Nielsen, the de facto leader in parliament for the leftist Red-Green Alliance (Enhedslisten).
"Refugee families will be living in permanent fear of the police car coming and sending them back to Syria," she said in a statement.